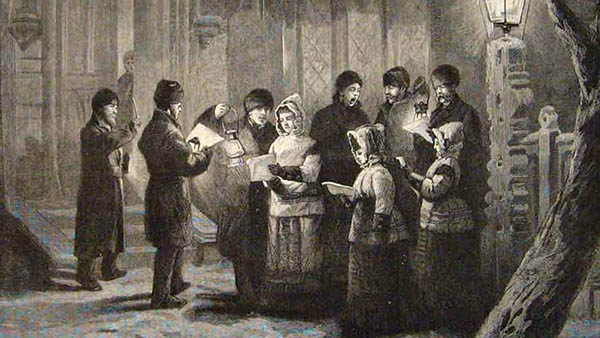 During the pre-Christian days in Europe, carols were originally pagan songs celebrating the winter solstice.

In ancient Rome and Greece, the people sang carols for holidays, birthdays and weddings. The word “carol” refers to a dance or song sung for joy, in contrast to the dirge which is a song sung in sorrow and grief at a funeral.

The United Kingdom and parts of Europe are peppered with standing stone circles, similar to Stonehenge, but of different sizes. During the entire year, people danced around the circles as they sang carols of praise and joy to their gods and ancestors. The nature religion of the Celts celebrated the annual wheel of the seasons as it spun through the year.

When the early Christians took over the pagan winter solstice celebration, they no longer permitted the singing of carols. New, more appropriate Christian songs developed. In 129 CE, a Roman Bishop declared that a song called “Angel’s Hymn” should be sung at the Christmas service in Rome.

Comas of Jerusalem, a Greek Orthodox priest, wrote the Christmas Hymn in 760 CE. These songs were written and sung in Latin, but the commoners couldn’t understand it. That was the language of the educated elite. By the Medieval times (1200s), most people entirely lost interest in the celebration.

In 1223 CE, St. Francis of Assisi set up living nativity scenes in Italy in and effort to rekindle the common interest in the celebration. His plays included songs or canticles in the common language of the people. Soon this practice spread across Europe.

The first Christmas carol was written in 1410 by an unknown author. It was about Mary and Jesus traveling through Jerusalem, and the piece called “I Saw Three Ships” came out during that time.

Things got very quiet in England in 1647 when Oliver Cromwell and the Puritans came into power. There was no Christmas and certainly no carols for many years until his reign was over. When Queen Victoria came to the throne, the restraints were broken, and the carol “Good King Wenceslas” was written and sung during this time.

As carols became popular once again, parishoners began singing them at church services. Carols by candlelight are still most popular at midnight services on Christmas Eve across the world.

The most popular song, “Jingle Bells” is both a carol and a winter song. James Lord Pierpont wrote the music in the mid 1850s originally as a Thanksgiving song. When first published, its title was “One Horse Open Sleigh.”

Pierpont was the choir director at Jingle Bells Church in Savannah, Georgia. The church is located in Troop Square and is still active today.