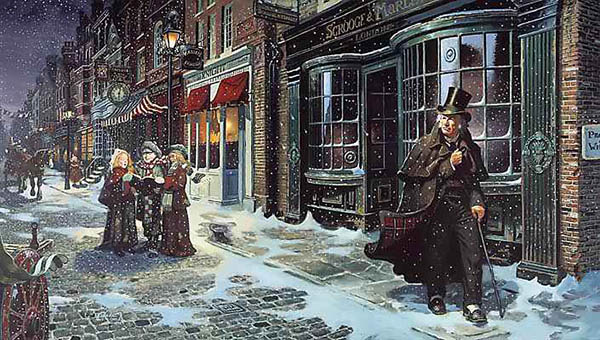 The word carol comes from the Greek choros, meaning “a dance”, with the Latin “choraula” and the French “carole”

Christmas time is synonymous with Christmas trees, lights, presents, holidays, and Christmas songs. These carols or hymns lift the spirits and convey the true Christmas feeling of love, joy, peace and warmth towards those around us.

The first Christmas carol is believed to have been “Gloria in Excelsis Deo”, sung by the angels to announce the birth of the Christ Child in Bethlehem. Musical prayers of the Christian Church followed and by 400 AD, priests were singing these Latin hymns on Christmas evenings.

In Italy, St Francis of Assisi became known as the “Father of Caroling” and decided to teach people about Jesus Christ through song. He had spent much of his youth as a troubadour so, together with the community of friars he founded, composed the first true Christmas carols. In 1223 St Francis and others performed some of his songs, with ring or round dancing, around a Nativity scene in a hermitage at Greechio, Italy. This started a tradition where churches displayed their own Nativity scenes at Christmas time with people acting out the events of the Holy Night. In 1224, the Franciscans introduced their carols to England.

The earliest English Christmas carol from this time is “A Child is Boren Amonges Man”., found in a set of sermon notes written by a Franciscan friar before 1350. Wandering minstrels began performing their carols by traveling around the country and later village “waits” (bands) sang and played at Christmas events.

Carol singing and dancing were popular as part of the mid-winter pagan celebrations and many occasions during the year as religious expressions of joy and celebration.

Collection of carols started to be printed

The earliest printed collection of carols was produced by William Caxton’s apprentice, and later successor Wynkyn de Worde in 1521. Richard Kele’s “Christmas Carols Newly Imprinted” was printed in 1550 but was starting to show the influence of the moralizing Puritans. During the 16th and 17th centuries the Puritans prohibited carol singing and dancing and only allowed holy and somber material from the scriptures to be used. A collection of carols later emerged such as “New Carols for this Merry Time of Christmas” (1661) and “New Christmas Carols” in 1662 but these were written by the Puritans and intended to convert people to their way of thinking. Many of these carols are no longer in use today.

The emergence of today’s carols from the eighteenth century

At the turn of the 18th century new carols were appearing such as “While Shepherds Watched”; and also “Hark The Herald Angels Sing”, written by Charles Wesley in 1739. But the Christmas carol and the real celebration of Christmas did not enjoy a proper revival until the mid-19th century, mainly due to Rev John Mason Neale from Sussex and Rev Thomas Helmore of Chelsea. They combined their skills of translating Greek and Latin Hymns and music, to publish a collection of 12 carols with the title “Carols for Christmas-tide” in 1853. The 1880s saw the return of carols being sung in church, after the long-lasting negative influence of the Puritans.

Many of today’s carols were written at the end of the 19th century and the beginning of the 20th century.

The most favorite of the non-religious carols are “Jingle Bells” and “White Christmas”, which first appeared as popular songs in the US. “God rest ye merry gentlemen” is an old English favorite rhyme and dates back to the 1500s. One of the most famous Christmas carols, “Silent Night, Holy Night”, was written by reverend Joseph Mohr in 1816, with the music by Franz Gruber in 1818.