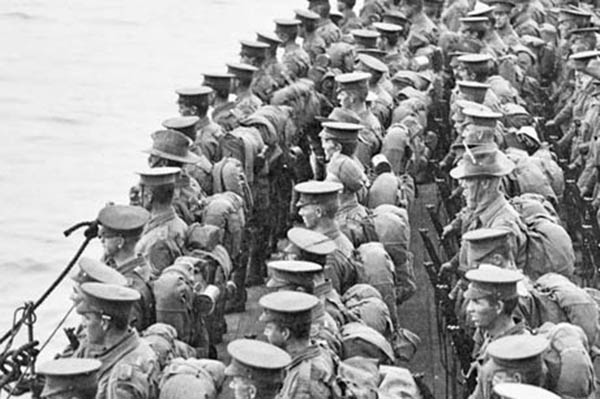 In May 1940 the British Navy rescued hundreds of thousands of British and French soldiers trapped on a beach in Northern France.

In the Spring of 1940 Nazi Germany had moved through western Europe, invading and occupying many countries. By May Nazi Germany had invaded Denmark, Norway, the Netherlands, Belgium and were making their way through France.

The Troops at Dunkirk

The British Expeditionary Force (BEF) and French soldiers had retreated back from the advancing German Army to a beach and a port in the very north of France; Dunkirk. The soldiers, numbering over 300,000 were effectively trapped, one the side there was the sea and the other was German armed units including heavily armed Panzer (tank) divisions. On the evening of the 26th May, the decision was taken by the British admiralty to launch an evacuation attempt of all the troops at Dunkirk.

The evacuation of Dunkirk was given the official name of Operation Dynamo. It began with a convoy of passenger ferries leaving from the ports of Dover and Southampton. Naval ships escorted the ferries and were to be used to carry troops as well. Despite the Naval escort the ships came under bombardment from the Luftwaffe. RAF planes were scrambled to engage the Luftwaffe in aerial combat to prevent them from bombing the ships.

The waters around Dunkirk were too shallow for the large ships to get close enough for the soldiers to board them, soldiers had to wade out into the water to board smaller boats launched from the ships. The first night of Operation Dynamo was not particularly successful. Over the next few days, the Navy commissioned almost every boat big and small they could find, convoys of hundreds of fishing boats, tugs and even life boats made their way across the English Channel to Dunkirk.

Even these small boats were at risk from aerial attacks by the Luftwaffe, submarines and even mines. By June 3rd the Dunkirk evacuation was over and was deemed successful in the hundreds of thousands of men saved from capture or death by the German Army. The British did suffer losses of Naval ships and RAF planes during the evacuation but overall, Operation Dynamo was successful.

The Public Reaction to Dunkirk

Initially the public were not informed about the situation at Dunkirk, it was believed it would be detrimental for public morale particularly if the evacuation operation was unsuccessful. During the course of Operation Dynamo the public were informed of what was happening, leading to hundreds of volunteers offering to help.

As it was a great success it became one of the most outstanding success for the British public during the Second World War, second only to the Battle of Britain. For the military although they lost very few men, all the equipment including heavy artillery had to be left behind on the beaches, although this was better than losing hundreds of thousands of troops, it did set back the war effort substantially.