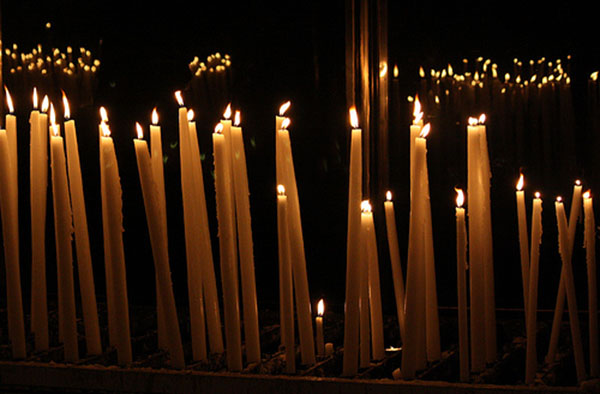 Pagan beliefs based on the progress of the year, Christian customs tied in with Christ’s birth and good, old fashioned folklore all combine in mid winter.

The Ancients well understood the progress of the seasons. Their very existence depended upon it. It was no accident therefore that February 2nd, falling midway between the winter and spring solstices should take on such significance.

A traditional part of the Judeo/Christian belief was that following childbirth, women were unclean. Forty days after the birth therefore, a woman was taken to the temple to be “purified.” At the same time, the newborn child was also taken to the temple and be presented and embraced into the faith. These traditional events became significant in the Christian calendar when linked to the birth of Jesus and the following purification of his mother. The date of February 2nd, 40 days after the date marked as Christ’s birth (December 25th) therefore became the day on which these events were celebrated.

The name Candlemas is also tied in with the importance of light. Symbolically, for Christians the time before Christ’s birth was one of “darkness,” whereas the adult Christ was known as “the Light of the World.” Far deeper goes the fear of darkness and the symbol of hope in the flame of a candle. On Candlemas therefore, sufficient candles to last throughout the year were brought into the church to be blessed.

The material for everyday candles was usually tallow, melted down animal fat, mainly from cattle. For the rich and for religious ceremonies, beeswax candles offered a purer light and gave off less unpleasant odours. The wick was a simple piece of stiffened string or cord drawing up the fat that then burned when the candle was lit.

In line with dependence upon agriculture, various beliefs grew up around Candlemas. Like St Swithin’s Day, when if it rains it is confidently expected that it will continue for the next 40 days, so Candlemas has its predictions. A clear, bright day foretells that harsh winter weather will continue for a further six weeks, whereas if it is cloudy then the worst of the winter weather is past.

Gauging how well he was managing the season, a traditional farmer hoped to have half of his hay and corn still in the barns to see him through to the next harvest.

There is little doubt that the celebrations in Canada and the United States tied in with the emergence of the groundhog were imported across the Atlantic by German settlers. In Germany there was already a long tradition that claimed if a badger emerged from his sett and saw his shadow, he would return to bed in the knowledge that winter was far from over. On a cloudy day however he would awaken knowing that the worst of winter was past.

The badger is to be found in North America but it is the groundhog that has become symbolic of this equinox.

The groundhog or marmot is a type of squirrel, disarmingly plump and with prominent teeth. Living in burrows and emerging in the spring, it lends itself nicely to the spring forecasts. This marking of a burgeoning spring still holds a hope for the coming of better weather. If the forecast is good then one believes it. If it is bad, then it can be dismissed as foolish superstition. Either way, it is an excuse for celebration and at this time of the year, what could be more welcome?