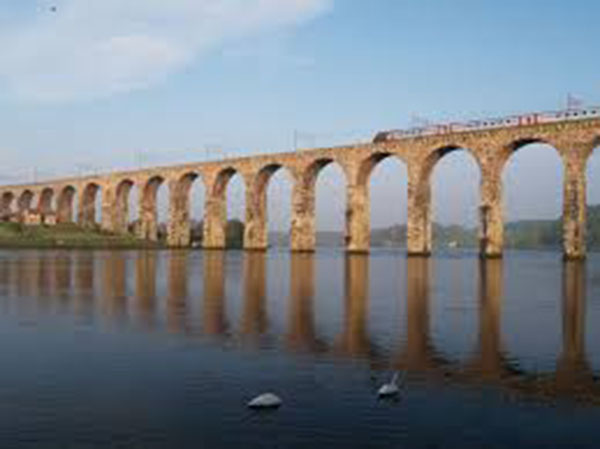 Hopes of building a new stone bridge to carry the Great North Road across the River Tweed ran high in Northumbrian Town of Berwick upon Tweed in 1609. The Privy Council had given Berwick Corporation rights to collect debts to the Crown dating back to 1485. The town’s great Champion, George Home, Earl of Dunbar was building a fine house there and overseeing the collection of these debts. James Burrell, Surveyor of the Bridge and full of ambition to build its replacement, became Berwick’s Mayor, so the town had dynamic men pursuing this crucial project.

The Untimely Death of the Earl of Dunbar

Up until the end of 1610, only £3347 of the debt had been collected, equivalent to £328,000 today and less than twenty percent of the amount notionally available. The debts were so old that collection difficulties could only increase. Matters took a turn for the worse in a cruel and unexpected way, on 29th January 1611, when George Home died suddenly at his Whitehall home in London.

Lord Salisbury Steps into the Breach

Sir William Bowyer, Captain of Berwick and a great supporter of the bridge project, wrote to Lord Salisbury to stress the importance of the bridge, reminding him that it was seen by King James as an important element in unifying England and Scotland under his reign. He went so far as to write that the townsmen ‘would rather build it themselves than want it’. He enclose Burrell’s latest estimate for a stone bridge with seven stone arches over the deepest and fastest part of the river, with a timber structure over the shallow and gentler southern side.

This estimate was for £5440, equivalent to £532,517 today. However, Bowyer was somewhat disingenuous when sending Burrell’s estimate. He advised Lord Salisbury that while Burrell was an honest man, he did not have the experience and was not up to the job of building a stone bridge over a wide tidal estuary. In reality, very few people did. Further estimates and models followed and Burrell’s the model appears to have been for a bridge of thirteen stone arches. Burrell also went to London to meet the Privy Council to pursue Berwick’s and his ambition.

The final estimate sent to London rose to £8,462 over and above the money already collected and partly spent on preparation work. This estimate was signed by James Burrell, as Bridge Master. Salisbury took action and instructed Berwick to surrender the Indenture under which the debts had been collected, stating ‘the King is unwilling that so important a work should rely on old debts slowly recoverable’. Although Salisbury regarded the estimate as ‘overmuch’, he instructed the Lord Treasurer, by a Warrant dated 16th May 1611, to pay to Berwick £8,000 in instalments.

The first £2,000 was to include £744 owed for work already completed followed by £1,000 a year. The Royal Forest at Chopwell, Gateshead, just down the coast, would provide the considerable amount of timber that would be needed. Another directive was that ‘the total of £8,000 was under no circumstance to be exceeded’. James Burrell was to receive 2s 6d (12.5p) per day, equivalent to £12.25 in today’s money, with 1s 4d per day (7p), £6.50 today, for a clerk to keep the books.

Burrell engaged Lancelot Branxton as his Master Mason and thirty-four days after the Warrant was signed, on 19th June 1611, properly funded work started on Berwick’s stone bridge, just a short distance downstream from its wooden predecessor. Only one thousand feet of turbulent water lay between Berwick, Burrell, Branxton and completion. Read about the methods they would use in the early seventeenth century.