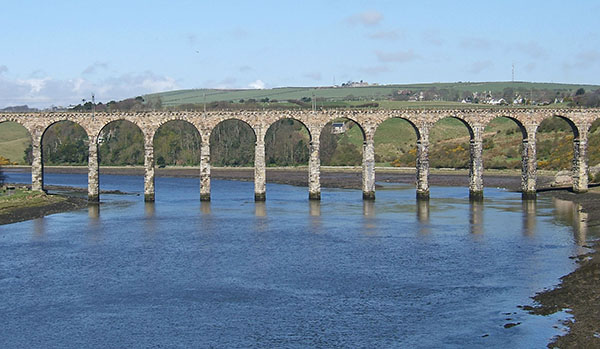 Part three describes methods that James Burrell would need to build his stone bridge, and the seasonal building constraints he would need to allow for.

Work started on Berwick’s stone bridge on 19th June 1611. In order to appreciate the pace of progress, you may find it useful to understand the seasonal limitations they would experience and the methods they would used to construct the bridge’s fourteen pillars and fifteen masonry arches.

In the early seventeenth century, Frost Fairs were still held in London on the frozen Thames and these lasted into the early 19th Century. Further north, in places like Berwick, winters were often longer and even more severe. Mortar used around this time was prone to frost damage, slow to dry and set, so building was a seasonal occupation. Before winter set in, work would have to stop in time for unfinished structures to be covered with straw and canvas, protection against frost damage.

This protection would stay in place until the spring was well established. More often than not, during the six months from October to March, little progress was possible. The social consequences of regular, large-scale unemployment, when food and fuel were in short supply and the weather cruelly cold, are probably unimaginable to many in the 21st Century. For builders and those financing construction in the 17th Century, it took two years to achieve what should have been one year’s progress.

The Design of Berwick Bridge

The design of Berwick Bridge evolved rather than happened, but its design initially settled on it having fourteen columns, supporting fifteen low arches. On the solid ground of each bank, a landstall would support the outer end of each outer arch. The bridge would be built with the pink sandstone from a quarry close to Tweedmouth.
Piers, Pillars and Cutwaters

Pillars that support a stone bridge have to transfer the weight of the arches through partially submerged piers onto solid ground beneath the riverbed, without hampering the flow of water. In those days, the piers under London Bridge were so close that they hampered the flow of the Thames. In cold weather it froze quickly and Frost Fairs took advantage. In other seasons, water rushed through the narrow channels so quickly, that many who travelled by boat to avoid London’s crowded and smelly streets would disembark rather than risk shooting London Bridge’s rapids.

James Burrell needed to get his design and calculations right; big challenges for someone who had never built a stone bridge. His one advantage was intimate knowledge of an old and respected adversary, the River Tweed. If any man understood its moods, tricks, strengths and idiosyncrasies, it was James Burrell. Each pier on which he would build a column, needed to be pointed like the bows of ships at both ends, to cut through ebbing and flowing waters and to break up the Tweed’s notorious ice floes. This cutwater shape would extend up each column to help deal with spring tides and Tweed floods. Knowing all this was one thing, creating the piers, the bridge’s foundations, would be beset with difficulties fifteen times over.

The Royal Forest at Chopwell, Gateshead provided 873 oak trees to the construction site, all towed up the coast and into the Tweed. Much of this timber was used to make piles, to be driven into the riverbed in the boat-like shape of the eventual pier. Roger Richardson, the Master Carpenter, led a team of twelve to create piles varying in length from six feet up to twenty three feet and in thickness from twelve to eighteen inches square, pointed and tipped with wrought iron shoes.

Manhandling a one-ton pile into position manually, from a rocking boat or when knee-deep in mud, would have been a very dangerous occupation. It is said that James Burrell designed and developed a completely new pile driver that could be operated by a much smaller team than needed formerly, but no evidence to support this has been forthcoming.

When all the piles had been driven into the riverbed, rock and rubble was tipped into the shape until filled and masons could finish the pier and construct the column ready to support an arch on either side. The columns were built with dressed sandstone blocks and for part of their height, replicated the boat shape of the pier. As they rose they would have been filled with rock and rubble, creating a massive, solid structure.

Centering for the Arches

Each arch required a complex timber structure built up and out from the two piers, or pier and landstall, to support the arch while it was under construction. This network of struts and planks, known as centering, supported a timber roof in the exact intended shape of the arch, both as a template to get the final shape right and as a bed on which the masonry would rest until the mortar set. Construction of centering on such a large bridge would have required planning, craftsmanship, precision, patience, balance, strength and time. There was little room for errors, some of which could lead to a dangerous collapse.

Over thirty stonemasons were employed to create the precise shapes needed to form each arch. Arches you may have seen in buildings such as old churches were often constructed from pre-shaped stones, set end-to-end on a relatively narrow centering frame, into which a single keystone would be lowered to complete the construction. These arches could be regarded as being two-dimensional – with height and width. The arches of Berwick Bridge needed the extra dimension of the depth, some fifteen feet.

The work must have been something like doing a jigsaw puzzle over a horizontal barrel, working from each side towards the middle, ensuring the centering shape is never distorted by too much weight in one part and too little in another. As the arch progressed, so the sides of the bridge could rise until the approximate shape of the roadway was established. All that was needed then was time for the mortar to cure before the cold weather arrived. Only when the masons were convinced that the mortar was no longer green, would the carpenters remove the centering, leaving a solid and graceful sandstone arch to support itself.

Now, Berwick needed to avoid spending more than £8,000 on the stone arches that would finally bridge the Tweed.