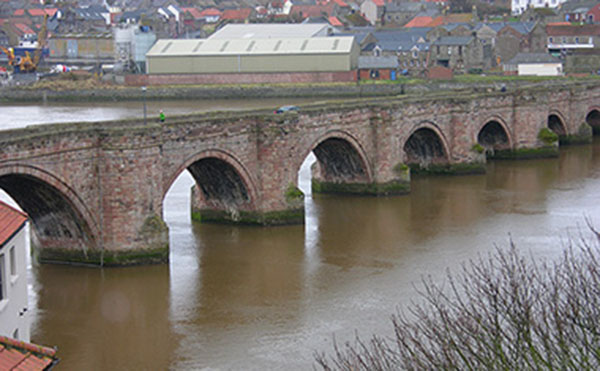 There were a variety of methods used in constructing Berwick’s stone bridge and certain constraints, including seasonal ones. This article compares the accounting records, which were reasonable, with the progress tracking which either never happened or has been lost over time.

At the end of September 1611, fourteen weeks into the project, £317 5s 0½ d (£317.25 and £31,052 at today’s values) had already been spent. Considerable preparation work was done, as 169 people had been paid, including 31 Masons, 2 Slaters, 12 Carpenters, 2 Ships’ Carpenters, 2 Sawyers, 9 Smiths, 22 Quarrymen, 76 Labourers and 9 Boys. Costs also included carriage of stone by boat from Tweedmouth, iron, steel, rope, cobblers maintaining bellows, and coopers for manufacturing buckets of various sizes for earth moving.

The accounts were sent to Lord Salisbury with a sketch of the masonry on the first pier, signed by James Burrell with a note stating that he had devised a new ‘ginne’, a pile-driver that would hoist and a ram of nine to ten hundredweight (112lbs or 50.8Kg) to drive oak piles into the riverbed. No diagrams seem to survive of this important and labour-saving device, operated by five men rather than the twenty on other hoists of similar capacity.

By late January 1612, expenditure had reached £562 5s 3d (today’s £55,000) and as the available balance was thought insufficient for the work and provisioning for the coming year, Salisbury was petitioned for a further £1,500 and an additional 100 tons of timber. Lord Salisbury, whose health had deteriorated, came to Berwick’s aid for the last time with a series of payments of £400 and £500. On 24th May 1612, Robert Cecil, Lord Salisbury, died, leaving personal debts of £30,000 (£2.9m in today’s values) after ensuring that Berwick could build its vital bridge.

Berwick’s Aldermen and Burgesses seemed to relish the arduous journey to London and back, delivering progress reports and bringing back the instalments. However, by May 1617, £8,000 had been spent with the bridge far from completion. Lord Salisbury had warned Berwick not to overspend, but was now dead. Berwick Corporation petitioned King James for up to £4,000 or £5,000 more (£390,000 to £490,000 at today’s values). They mentioned that not one penny of the £8,000 had been mis-spent and that the work they were undertaking was ‘a great worke, yea such a one as beinge finished, they do not thinke that any Kinge in the worlde ever did a more worthie and memorable worke, then this wilbe to your Majesty.’ The sum of £4,000 was approved and £1,000 was paid in four instalments.

Early in 1620, The Privy Council wrote to Justices at Berwick directing them to investigate the lack of progress and costs. The Justices engaged an independent Surveyor and investigated. Their report was favourable and they described the bridge as ‘workmanlike and substanciallie well wrought’ mentioning recent flood damage which they thought repairable for £20, (£2,000 today). Their report on the costs of the visits to London was less favourable and they criticised the large sums spent. Further concerns arose for the Privy Council in April over the accounts for 1619 and the Justices were instructed to estimate costs to completion.

Bishop Richard Neile, a close friend of King James, former Bishop of Lichfield and of Lincoln, was a pragmatist rather than a scholar and an experienced builder. He was asked to take the completion of the bridge under his care, so that ‘neither money nor materials would be misapplied’. He met first with Sir Fulke Greville, Chancellor of the Exchequer and Inigo Jones, Surveyor-General to King James, before travelling to Berwick where he found there were still five more arches to build.

He wrote to Greville on 22nd August, praising the care taken by those in Berwick, and noting the impact of floods. He criticised slow delivery of wood from Chopwell, but reserved his strongest criticism for the payment method and its consequences. Workers were paid by the day, rather than results and thus were ‘spinninge of it out’. His solution was modern and simple – a fixed term, fixed price contract, known as a Contract in Gross. He stated that the bridge should be passable to vehicles by Midsummer Day 1621, with paving and walls completed one year later. His estimate was for an additional £1,200 (£118,000 today) and a further 200 tons of timber.

Greville thought hard and took professional advice, before replying on 12th September agreeing in principle, but warning against the work being skimped. He advised that the strength of piles, piers and foundations must be maintained as well as the size and quality of the stones used. Neile made a revised estimate of £2,074 (£203,000 today) and 250 tons of timber and asked Greville for a prompt reply. Greville consulted the King who was agreeable, expecting that under Neile’s care, the work would be ‘fitt for soe Royall a Monument of blessed union between the two Kingdomes’ adding that he felt that strict bargaining in that ‘cheap country might have the effect of pricing down within the bishop’s first estimate’.

The contract was executed on 12th October 1620, between Bishop Neile and five Bridge Commissioners on one part and James Burrell, Surveyor, and Lancelot Branxton, Mason, on the other. They were to build six piers and five arches at the Tweedmouth end of the bridge, and open the bridge for traffic by Midsummer Day 1621, completing paving and walls the following year. The budget was £1,750 payable in instalments in line with progress. The two men signed a Bond between them and the King for £2,000 to keep to the contract without fraud or delay. Given that the 1620 building season was ending and that they needed to build five arches in a few months, the risks were enormous. How would James Burrell and his team cope?