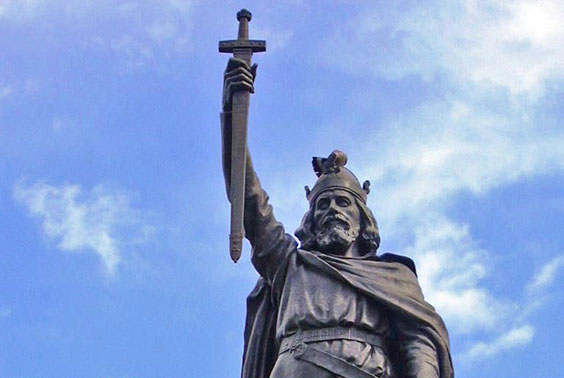 Alfred was a warrior king, and a brilliant one at that, but he was also a learned king, one who cared very much about literature and language and perpetuating the memory of not only himself but also his people. To this end, he promoted and even took part in the translation of a collection of books from the vaunted Latin into the more pedestrian Anglo-Saxon, thereby ensuring that the contents of those books could be enjoyed by even the most pedestrian of Germanics (provided that they could read, of course, or, in the worst case scenario, provided that they could listen to someone else read).

Among the books winning this translation were texts in history, philosophy, and religion. Included in the last category was Gregory the Great’s Pastoral Care, which was a sort of handbook for bishops. These books were sent to all the bishops in England, so that they might instruct their flock anew. (This came about in no small part because the Danes and Vikings had sacked so many monasteries and burned everything in them, including all the books.)

Alfred did some of this translation himself, including Boethius’ Consolations of Philosophy. Orosius?s The History of the World and Bede’s Ecclesiastical History of the English People. Like Bede before him, Alfred knew the importance of education and learning, and he placed a premium on practices that advanced and encouraged both. He encouraged and financed the construction of schools, so that his people could learn more about themselves and the world around them. One legend has it that he started the first university at Oxford.

Alfred was also the main backer for a series of chronicles that would evolve into the Anglo-Saxon Chronicle, one of the most recognizable and most oft-quoted sources for Anglo-Saxon life ever written.

All of these deeds and facts suggest that Alfred was concerned not only with his and his people?s here and now, but also with their descendants? there and then. One he was fairly certain that the Danes had at least been contained, he turned his attention to improving the lot of his people. As amazing a military tactician as he was, he was perhaps even moreso a forward-thinking ruler who placed supreme importance on his people?s and his kingdom?s ability to grow and thrive, to meet challenges not only on the battlefield but also in the literary and intellectual realms. Rather than shame his people into docile obedience at the hands of himself or of the clergy, as previous rulers had done, Alfred chose to encourage his people to think for themselves, to learn for themselves, and to fight for themselves. It was a truly cosmopolitan idea, one that promoted unity in a land that sorely needed it. For this far-reaching vision as well, he can truly be called Alfred the Great.