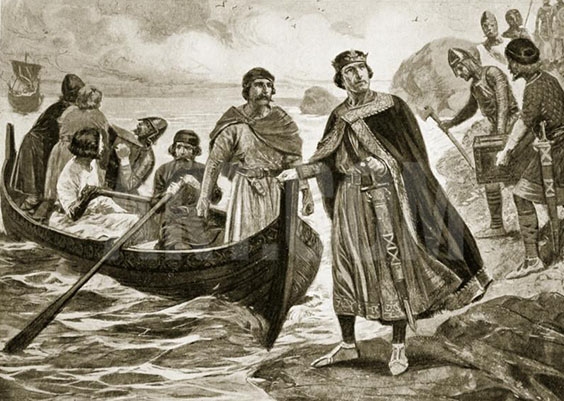 It is likely that many British schoolchildren, past and present, will recognize the name of Aethelred the Unready (if only because it’s such an odd combination of words and letters).

In the previous article, Aethelred was seen to come to the throne through treachery, at the expense of his half-brother, Edward, who was murdered either by the hand or at the behest of Aethelred’s mother, Elfrida. And Aethelred was suddenly King of England. He was 10.

Because he was so young, he depended on henchmen and other advisers to give him advice and make decisions for him. This created a good bit of trouble for the king’s subjects, especially when the Danes came back in force.

The Danelaw had worked for a time, of course, mainly because English troops kept it efficient and because the Danes had been beaten so badly that they were home licking their wounds for a good many years. But they came storming back in 980, but Aethelred was definitely unready for their return.

He wasn’t much of a fighter, really, preferring to have his mother do his dirty work in order to get him the throne. And once he was on it, he preferred to spend the money that his predecessors had worked so hard to earn.

This propensity to spend ruled his thinking when the Danes returned as well, and Aethelred, after a few years of disastrous defeats, offered them a huge bribe not to attack the English anymore. The Danes, who were after money as well as land, decided to take Aethelred up on his offer and pocketed the money. This Danegeld, however, was a terrible example to set, especially for such greedy “settlers” as the Danes, who came back and kept on coming back, in more force, demanding more money.

The payment in 991 was 10,000 pounds of silver. The Danes, naturally, thought that this was a good deal, so they accepted. A relative peace descended over the land. Three years later, the Danes wanted more money, this time 16,000 pounds of silver. Having little choice, Aethelred agreed to pay, again.

In 1002, the Danes demanded 24,000 pounds of silver. This was an extraordinary sum, equal to about 2 years’ worth of income for the entire country of England. Aethelred resolved not to pay the money. What did he do instead? Did he offer to lead his people into battle, as Alfred had done? No, Aethelred decided to resort to treachery.

He decreed that all Danes living in the Danelaw should be killed on the same day. His henchmen and soldiers carried out this sentence on November 13, 1002. Among the dead was the sister of Sveyn, King of Denmark.

The Danes were so outraged by this cowardly act that they sent a huge force to retaliate. This time, of course, during which Aethelred was able to restore some sense of normality to the countryside.

But in 1006, the Danes returned in full force, ready to spread destruction across the land. Shrewdly, though, they demanded another Danegeld against the promise to not attack. Would they keep that promise? What would stop them from taking the money and still attacking? History cannot be sure whether Aethelred asked himself these questions. The king, however, agreed to pay the ransom, all 36,000 pounds of silver.

The lull between Danegelds had allowed Aethelred to save up a bit of money, however, and so he was able to finance the building of longboats and the raising of an army once he had finally decided to fight back.

The next few years are shrouded in the mysteries of unwritten history. What we do know is that the English and the Danes fought many battles, on land and at sea. The Danes were generally more successful for the first few years, then massively successful after 1009.

In 1013, Sveyn and his son Canute arrived on English shores. They worked their way south, subduing Northumbria and Mercia along the way, until they came to Wessex. Aethelred, in panic, fled to Normandy.

England no longer had an English king.

Aethelred, it has been seen, was fled to Normandy, his scheming finally having gotten the better of him and his country. The Danes were in full control of the country, or so it seemed. The magnanimous Sveyn, King of Denmark, was now the leader of England.

Sveyn and his son Canute had arrived in 1013, to drive home the point that the Danes wanted respect, not just more money. Their armies had driven south through Northumbria and Mercia and had sacked southern England, forcing Aethelred to flee. The Danes were already in charge of a large part of the Island, anyway, thanks to the Danelaw. Now, they wanted it all.

But Sveyn, as powerful as he was, couldn’t escape death. His was an untimely one, coming so soon after he assumed power in England. And the English saw an opportunity to rise up against Sveyn’s less magnanimous son Canute.

Rise up they did, in such numbers and with such purpose that Canute fled the country. Aethelred, at this time depending more and more on his sons, returned to reclaim the throne. Those sons, by the way, seemed to have their own interests at heart, perhaps taking after their father. Edmund, the oldest son, tried to endear himself to the Danes by marrying one of them, the widow of Sigeferth, one of the powerful Danes that Aethelred had ordered killed in 1014. The Danes were so pleased at this that they proclaimed Edmund to be their ruler, creating a rift between father and son.

At this time of familial unhappiness came the return of Canute, this time with more men and purpose. The response was divided, just like the country. Aethelred’s days as king were again numbered.

He, in fact, died during this struggle, passing the throne in full on to Edmund. They had reconciled their differences in the king’s last days, and this made it easier for the English to accept Edmund as their leader, which they did in 1016.

Postscript: Aethelred has been labeled “the Unready.” This is not exactly what he was first called. The chroniclers of this period of history first termed him redeless, meaning that he was without rede, or council. This was true, since he didn’t really have a ruling council, relying more on his henchmen and soldiers to “advise” him. The description became an epithet when later generations reviewed the situation and found Aethelred unready to assume command. Alfred’s shadow was still, indeed, long.