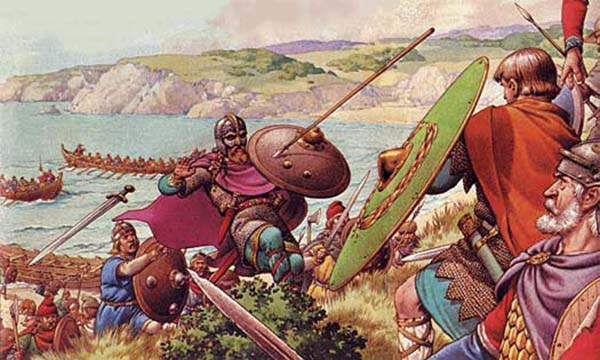 When the dust settled after the Battle of Badon Hill, the Saxon migrations had stopped but the Saxon presence in Britain had not evaporated.

The kingdom of Sussex, in the southeast corner of the Island, was alive and well, thriving almost, under its leader, Aelle. Now here is a figure that we know a little something about, although contradictions abound here, too. Aelle is alternately said to be a Saxon leader and an Angle leader. It probably doesn’t matter in the grand scheme of things, since it will suffice to say that he had moved his commanding presence to Britain from the Germanic lands on the Continent.

Now, in 477, Aelle founded the kingdom of Sussex. Whether he called himself or a king or just a leader of the tribe is not known for certain; we do know, however, that he was the head of Sussex. The leader in those days was almost always one of the best or the best warrior of the lot, so we can assume that Aelle knew a little about fighting. We can probably also assume that he knew a little about running things and governing people, since he remained leader of Sussex for a good long while.

His presence in that southeastern corner must have been a thorn in the side of Ambrosius or Arthur or whomever was leader of the Britons at that time. (Indeed, some stories name Aelle the Saxon commander at the Battle of Badon Hill.) The very fact that Sussex had a leader and a sort of government was proof that the Saxons (or Angles) had come to stay.

You could probably argue that Hengist and Horsa, in establishing the initial Saxon presence on the Isle of Thanet, proclaimed the first Saxon kingdom or permanent settlement in Britain. But Aelle it was who made the idea work. He was overlord of other Germanic tribes as well, predating the invention of the word bretwalda but not the concept. At one time, according to the Venerable Bede, Aelle controlled all English rulers south of the river Humber. This is quite a large territory. Aelle was in charge of land and people. He predated the landing of Cerdic and Cynric by 18 years, and his rule was firmly established by the time they arrived.