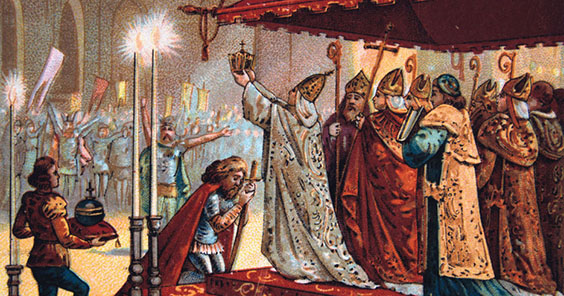 The Anglo-Saxon Chronicle has a curious entry for 797:

This year the Romans cut out the tongue of Pope Leo, put out his eyes, and drove him from his see; but soon after, by the assistance of God, he could see and speak, and became pope as he was before.

This entry is curious for two reasons:

First of all, it makes it sound like the events took place within a few days or weeks or even in the same year, since the entries for the next few years make no mention of this event or of Pope Leo. (This was Pope Leo III.)

Secondly, it makes it sound like a miracle. Historians now think that Leo was merely injured and not disfigured. Yes, he was attacked, the facts tell us, and yes, he was severely injured; but was his tongue really cut out and were his eyes really put out? The writers of the Chronicle would have us believe that a miracle took place in that Leo regained the use of his tongue and his eyes by the grace of God and regained his seat in the Holy See by the same method. However, according to the history books, Leo wasn’t really maimed. It seems that his attackers didn’t quite succeed in their treacherous goal, although they did succeed in driving Leo from power for a time.

Leo became pope in 795. The shadow of Charlemagne, the Frankish king, loomed large over Rome and the rest of Europe. Leo and his backers were afraid of Charlemagne and his influence. Immediately after being named pope, Leo sent to Charlemagne the keys of the confession of St. Peter, along with other attempts to curry his favor.

Trouble was, Leo’s enemies were also trying to curry the favor of the Frankish king. They thought they had his support in the bag when they jumped Leo and beat him down and out of Rome. Charlemagne, however, had other ideas and accepted Leo as his guest when the erstwhile pope landed in the heart of Frankish territory, bleeding but alive, neither blind nor mute. He was thought to have lost at least some of the faculties of these senses, however, according to many other sources. By the time regained the papacy, he was fully healed. More on this in a bit.

Anyway, Leo got his supporters together and, backed as well by Charlemagne, went back to Rome. It probably didn’t hurt that the Frankish king and a good number of his troops were behind Leo in this, but the result was that the very enemies who had tried to maim Leo were themselves cast into Frankish prisons. This was 799.

The next year was monumental, both for Leo and for all of Europe.

In 800, Charlemagne brought the conspirators to Rome to answer to Leo. And rather than send his enemies to their deaths, Pope Leo decided to send them into exile, from which they could return on pain of death. Then, Leo placed a crown on Charlemagne’s head and proclaimed him emperor. The Holy Roman Empire had begun.

But this is not the end of the analysis. One question remains: Why would the Chronicle writers and others insist that Leo had been fully muted and blinded when he hadn’t? Was it to make his complete recovery all the more miraculous? Of course. Remember that the Anglo-Saxon Chronicle was written years after these events took place. The chroniclers wanted to make their heroes look good. Leo was a hero because he gave the crown to Charlemagne. Leo was an astonishing figure because he courageously retook the papacy. He was injured, yes, perhaps severely, and he did recover completely, so much so that to chroniclers of the events, his recovery took on miraculous overtones. And why go for a halfway miracle when you can have the whole thing?