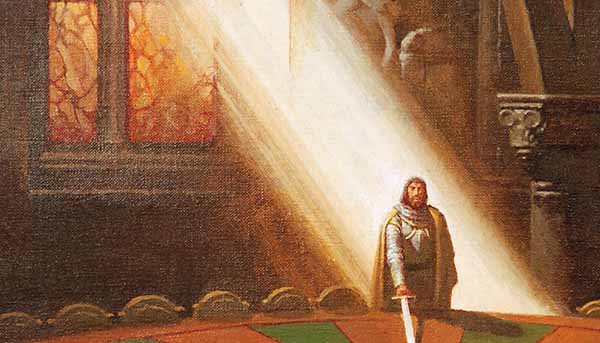 Arthur was barely a teen. He certainly was not a warrior. Yet he was king. Why?

Forget the story of the Sword in the Stone for a moment. Even if it was true, it wasn’t the real reason Arthur was the ruler of the land. He was king because his father was king. King Arthur was the son of Uther Pendragon, High-King of the Britons. Few things in history are so simple.

Let’s review the historical situation for a moment. History tells us that there weren’t anyBritons, except for a rag-tag bunch of folks who called themselves warriors and claimed to fight fortheir homeland. So, these Britons were fighting to keep their land their home, in the face of an everincreasing invasion of Saxon settlers. They needed a leader. But a war leader wouldn’t do. Ambrosius found that out the hard way. Britain needed a king.

So, then we saw Uther, brother of Ambrosius. He was made High King. He served long enough to win a few victories but not long enough to feel the effects of his success. He left behind the hopes of a nation–and a small boy.

Nobles made their claims and fought for their lands for years. Again Britain had no king. The Saxon presence grew stronger. Suddenly, a High King was crowned–Arthur.

British history before and since is full of examples of coups and revolutions and other such government overthrows of legitimate rulers, those who had the right bloodlines. Why, then, was Arthur’s claim to the kingship allowed to stand? Perhaps it was the necessity of the times. Perhaps it was magic. Perhaps it was because the nobles realized that he was their best hope. As with so many things Arthurian, we don’t know. We have only very sketchy facts and a whole lot of legend. It is curious and extremely noteworthy that the young Arthur was allowed to rule at a time when perhaps a more desirable clainianat could have been found. That the nobles allowed Arthur’s rule is to their credit. Why they allowed it is lost to the sands of history.