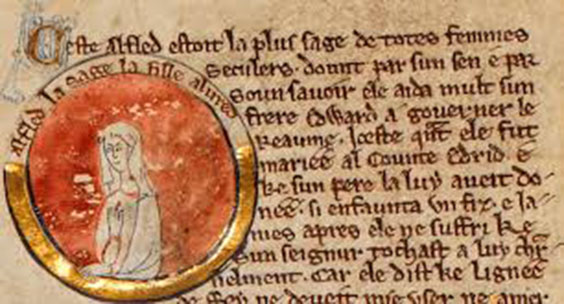 The Anglo-Saxon Chronicle, often comprehensive yet often sparse, provides a wonderful record of what was happening during the times that England was ruled by Saxon leaders. The Chronicle, which comes down to us amazingly through the centuries of times past, is a mixture of the plain and the bizarre. Descriptions of battles and politics and intrigue and religious disputes are written about with a near-objective point of view. The book(s) include entries based on years on the calendar. Each year might have anywhere from one to 10 entries, based on what was happening that year and how it related to the overall historical picture. And although it could be argued that the Chronicle contains tales of eclipses and other “supernatural” instances, it could also be argued that often, the Chronicle is the only thing we have in terms of direct historical records of the Saxon period. Sometimes, the monks who were writing the entries had a great deal to say; one-sentence entries are the norm elsewhere in the Chronicle.

It is significant, then, that the year 1066 has multiple entries and, indeed, multiple accounts of the events that led to the Norman Conquest. One wonders, on first glance, why, in fact, the monks chose to use so many words to describe something that was already wide known and is still scrutinized to this day; further, why include more than one version of the events, which alternately reinforce and contradict accounts of the time period. A close examination of the multiple accounts reveals more similarities than differences, and perhaps that is just as well, since we probably wouldn’t want two vastly divergent accounts of the same set of events. (Historians tend to like nice, neat solutions to problems and/or straightforward explanations to phenomena.)

The bias and self-interest of the writers comes through in these accounts as well, as King Harold the Saxon is portrayed as a valiant, rightful ruler beset on all sides by “godless,” ambition-driven men whose only thought was to claim the English throne for themselves. Time and again, Harold is confronted with extremely dangerous challenges to his rule; time and again, he prevails – until William of Normandy arrives on the scene.

The choice of words is not accidental, either. Harold is described as being an almost-perfect military and civic leader, someone who can be trusted to defend England against all challengers. William is shown to be a power-hungry, land-hungry usurper. It is said that history is written by the winners; in this case, at least for this part of history, the losers have written the history.