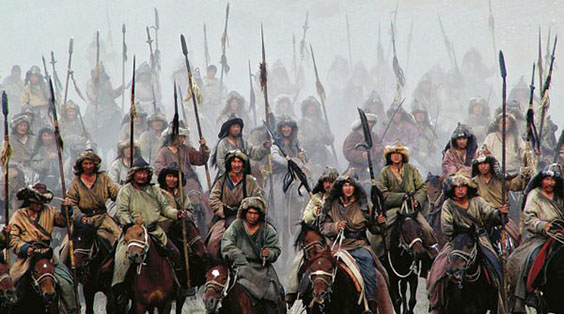 History sometimes seems to be an inevitable process – but it was not. There were many occasions when a major change could have happened but was diverted by chance.

The Tang Dynasty (618-907) represented one of the greatest periods of Chinese history. Chinese territory increased enormously and the Chinese way of life was brought to dozens of new peoples and tribes. The population of settled Chinese farmers swelled significantly and this meant an increase in the tax base which enabled Chinese emperors to develop the civil service and the courts and to bring hitherto unimagined sophistication to the world.

Yet all of this grandeur and glory could so easily have gone wrong. At the boundaries of Chinese influence, there was often little distinction between the rulers and the ruled. The horse nomads who lined up along China’s long western borders alternately threatened and fled from the imperial influence. The need to maintain a lead in the arms race offered many opportunities for social mobility for those who were clever, opportunistic and ready to chance their arms. One such was An Lushan, who was half-Turkish, half-Sogdian and rose to prominence as an officer in the imperial military service. His parentage made him both part of a ruling elite and an expert horse warrior in his own right. Luck kept him alive during the campaigns of his early life when a casual wound could have destroyed him as easily as collecting a mosquito bite. It made him hardy too, and when he banked up his own power by converting a border fortress into his private stronghold, thereby attracting the Emperor’s hostility, he took the opportunity of stirring up a vast revolt in about 756 CE. Revolts can always go both ways: in his case, opposition to the centre was enhanced by perceptions of its weakness and belief in An Lushan’s military ability to beat any enemy that might be brought against him.

The facts appeared to bear out this belief: An Lushan carelessly destroyed the Chinese armies sent against him and advanced on the imperial capital. The emperor, believing that Heaven’s Mandate had been withdrawn and that all was lost, prepared a riding party to flee to faraway Szechuan. And then – then An Lushan died. It seems needless and it has never really been clear exactly why it happened as it did. Chance or design? Whichever was more important, An Lushan’s followers could not agree what to do or who should lead and spent years, decades even, holding on to the territory they had conquered and not really doing anything with it. They could have resolved on a leader and then created their own dynasty. They did not or could not and, finally, the Chinese Emperor contracted an alliance with the nomadic Uighur people and destroyed them. How easily the course of history could have been diverted into another watercourse – or perhaps it would have made no difference who wore the crown?

Art and Literature of the Chinese Song Dynasty

The Original Building of The Forbidden City in 1420

The Opium War and the Opening of China