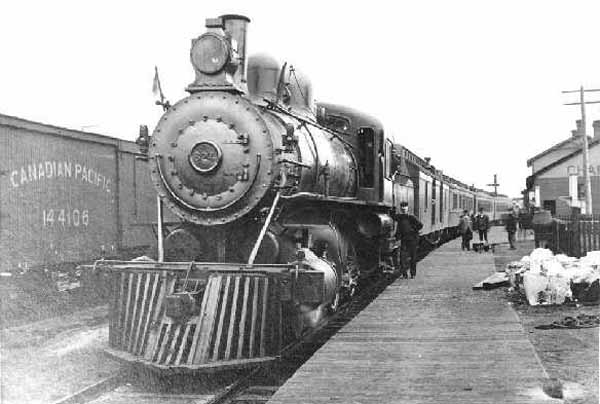 The Canadian Pacific Railway (CPR) was the dream of Sir John A. Macdonald as he envisioned a Canada that would stretch from the Atlantic to the Pacific Ocean. In order to bring British Columbia into the Dominion of Canada as the westernmost province and to complete this dream, he promised the Colonial government and the people of the colony that a railway would be built within ten years. This railway would provide them with the connection they needed to the central government in Ottawa and the parts of the country that were inaccessible to them because of the Rocky Mountains.

Bitter debates waged over the cost, the route and the schedule of the proposed railway. In the election of 1872, when Macdonald ran short of campaign funds he promised contracts to Sir Hugh Allen, who was the owner of a construction company with associates in the United States. This money became the source of the Pacific Scandal and although Macdonald and senior members of his cabinet were accused of taking bribes there was not enough clear evidence to provide actual proof. It did raise such a commotion, though, the Macdonald was forced to resign and the Liberal Prime Minister, Alexander Mackenzie, was not committed to the project.

Work began on the building of the railway in 1875 at Fort William, Ontario. Little headway was made, though, until Macdonald came back into power in 1878. The funding for the project was not realized until 1891 when a group of financiers from Montreal founded the Canadian Pacific Railway Company. The government granted them the land they needed and a monopoly over the transportation route between the main line of the CPR and the US for a period of three years.

William Cornelius Van Horne was assigned the task of overseeing the building of the new railway. Within a year he had completed almost 900 km of track. The construction across the prairies was quite rapid, but in the Canadian Shield north of Lake Superior large sections of rock had to be blasted. In other areas, the track was laid and then sank into the marshes and bogs.

Construction also started on the CPR from the west so that the lines would meet. In British Columbia, the Rocky Mountains proved to be very challenging. Narrow ledges were carved into the sides of the mountains and flimsy bridges were built across deep caverns and rivers. There was a lack of available labor, so thousands of immigrant workers were brought in from China. These workers were paid very low wages and were forced to live in segregated camps under very unsanitary conditions. Many of them died from disease or were killed in construction accidents because they were assigned the most dangerous jobs.

The CPR was in financial difficulty in 1885 and workers who had not been paid for weeks went on strike. The development of the Northwest Rebellion in that year gave Van Horne the help he needed. The soldiers were able to move into the region to crush the rebellion because of the completed tracks and he was able to show how important the completion of the CPR was for the country as a whole. The government was able to come up with the funding when the rebellion was put down.

The two lines moving from the east and west met at the small community of Craigellachie in the British Columbia mountains in November, 1885. Many business people, government officials, surveyors and contractors descended on the town on November 7 to witness the driving in of the last spike. The first passenger train to travel from east to west on the CPR was the Pacific Express, reaching Port Moody on July 4, 1885.

The Tale of Flowerpot Island: A Native Legend

The Search for the Northwest Passage, Arctic Shipping Route

Christmas Around The World – Canada