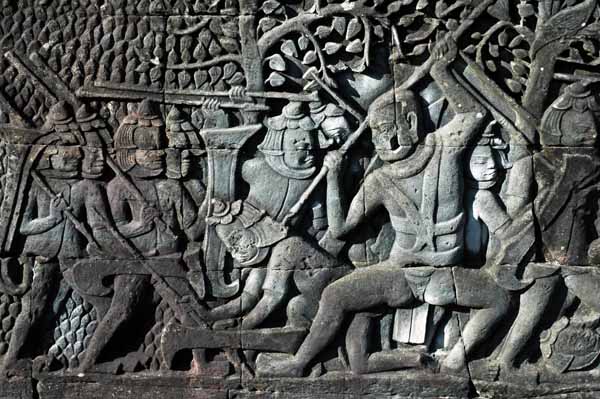 In the early centuries of the Common Era (long before the unification of the Khmer Empire) the people of the Mekong Delta region “deliberately and willingly underwent a process of Indianization to consolidate and magnify their rule,” according to archeologist Michael D. Coe. The introduction of Hinduism was especially useful, as the Khmer kings were able to identify with the cults of Hindu gods.

The earliest documented civilization in present-day Cambodia was known as “Funan.” Its people lived on the southern coast and mingled with Indian traders. At Oc Eo, the most important archaeological site from Funan, objects have been discovered that are likely Indian in origin, including depictions of Buddha.

Chinese records dating from China’s first contact with Funan in 225 A.D. reported that Funan’s legendary account of its civilization’s conception mentioned an Indian king or brahman arriving to found the civilization. While the story is fanciful, it does indicate a definite Indian influence in the region from a very early period.

Following the decline of Funan, the effects of Indianization continued. Records indicate that Funan declined in the fifth century, and seems to have been replaced by a kingdom called ”Zhenla.“ A possible explanation, reported Coe, is that “there was an early ‘Funan’ polity, centered in the Delta, possibly with a single capital at Angkor Borei… and strongly linked by trade with both India and China. From the mid-sixth century until the establishment of the Angkor Empire in A.D. 802, ‘Fu-nan’ had been succeeded as the major power in this part of Southeast Asia by ‘Zhenla’, led by Khmer kings who had come from the north, beyond the Dangrek Range, into the inland basin of Cambodia.”

Although it is debatable whether or not Funan was a direct precursor state to Zhenla, both civilizations shared Indian characteristics that suggest a continuity of Indianized states in Cambodia that began in the Funan era. This is evidenced by the Sanskrit names that Cambodian kings gave themselves. “As early as the fifth century,” writes Coe, “superior pon [chiefs]started claiming kingship, taking on Indic names and titles, especially a Hindu god’s name followed by the honorific suffix -varman.”

Coe gives the example of the earliest confirmable Khmer king, Rudravarman, of the sixth century A.D.

The results of Indianization continued when the Khmer Empire was founded in 802 A.D. by Jayavarman II (according to Khmer texts, he was crowned by a Brahmin priest), and proved to be a hallmark of the Empire’s existence. The use of the Sanskrit suffix “-varman” by Khmer kings continued, and the era’s surviving architecture testifies to the pervasiveness of Indian religions in Cambodia. When Angkor Wat was built by King Suryavarman II in the 12th century, the monument was dedicated (at least in large part) to the Hindu god Vishnu.

When the devout Mahayana Buddhist Jayavarman VII took power in later in the 12th century, Hinduism was set aside (but not entirely forgotten) in favor of this other Indian religion, until the eventual adoption of Theravada Buddhism in the post-Angkor period.

It is noteworthy that the Khmers seemed to have willingly accepted Indianization. Therefore, the question rises as to why the Khmers chose to appropriate the culture of faraway Indian principalities. One likely explanation of the Khmers’ acceptance of Indianization was that the rulers found it useful. According to the Cambridge History of Southeast Asia, “Early Khmer leaders learned to justify their authority by placing it in a universal context of devotion that could fully absorb the religious aspirations and compel the loyalty of their followers.”

Such uses of Indian culture were not limited to Hinduism. The Bayon temple, built by Buddhist king Jayavarman VII, contains dozens of carved faces of what is generally believed to be the bodhisvatta Avalokiteshvara. As Coe points out, however, “this may well be the visage of the king himself, since it so strikingly resembles the face of statues accepted by most as Jayavarman in meditation,” thus suggesting that Jayavarman VII had an identification with Buddhist bodhisvattasthat was similar to other Khmer rulers’ identification with Hindu deities.

The Indianization of Cambodia was not unique in Southeast Asia. Save for Vietnam (who derived their influence more from China than India), most cultures in the region underwent a process of Indianization in antiquity. This was probably done to suit the needs of the rulers, who found Hinduism an exceptionally useful tool in governance. Since the Indian kingdoms had no interest in colonizing Southeast Asia, these Southeast Asia civilizations were able to take what they needed from India while retaining political independence.

The Mongols and Plague

The Japanese, Subhas Bose and the Andaman and Nicobar Islands

The Hamzanama Manuscript of Emperor Akbar the Great

North Korea Struggling to Survive in the 1990s: A Country Torn Between Famine and the Atomic Bomb