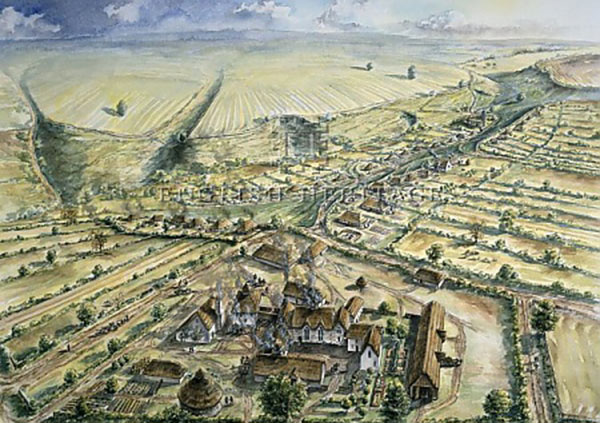 Excavations at Wharram Percy have revealed many details about the life of the village. The village developed from a prehistoric settlement into a fully fledged Norman village before being abandoned in the sixteenth century.

But most of all, archaeology shows what life was like in the medieval village. Excavations at Wharram Percy how the villagers lived and died how their houses were built and what conditions were like for both peasants and the lord of the manor.

Development of a Medieval Village

The site of Wharram Percy was occupied from prehistoric times. One area of the village that encapsulates the long history of the site is the villages’ church which is built over the site of an ancient burial mound and sacred spring, indicating the continued sacred significance of sites, whatever the religion.

But whilst Wharram Percy may have had a long history as a settlement, it did not become a proper village until the tenth or eleventh centuries. It is this latter part of the sites history that has been most intensely investigated.

The Medieval Houses of Peasants

Aerial photographs taken in 1948 first identified the layout of Wharram Percy’s peasant houses. There are two groups: one set on the plateau and the other in the valley opposite. Both groups of houses are arranged in a row s, each house having a narrow strip of garden at the rear. Inside was a main area for cooking and working, flanked by sleeping areas. Livestock were also kept in the house, at the opposite end to the family.

The basic skeleton of each house consisted of a frame of ‘A’ shaped curved timbers which formed the walls and roof. These timbers were built to last. No matter how many times the house was remodelled, the timbers remained in place. If a house was extended, more were added. Entrances and other features would be reorientated to suit the changing building.

The walls and roof of the house were less durable, which was why the peasant houses of Wharram Percy needed to be rebuilt every generation. Walls were made of wattle and a lime and animal hair daub whilst the roof was thatched with straw or reeds.

As primitive as these structures may sound, it seems that the houses of Wharram Percy had some comforts. Doors appear as dips in the earthworks and remains in the archaeology show they were substantial structures set in stone door jambs on iron hinges. Smaller hinges and pivots also suggest that many buildings had window apertures with shutters to let out smoke. In many cases, these windows were not just open holes but glazed as fragments of lead and glass have been discovered.

But on the whole, few finds have been found in the houses of Wharram Percy. Despite cramped living conditions, the villagers were diligent about keeping their homes clean. Most finds are found in the yards of houses, showing that floors were regularly swept out.

The archaeology also shows that the position of Wharram Percy’s manor house changed as the social attitude of the Lord of the Manor altered after the Norman Conquest.

The original manor house was well within the village close to the church. Finds show it was a substantial dwelling built from sandstone in contrast to the peasant dwellings. It was equipped with latrines and other amenities and was probably a comfortable dwelling. But it was abandoned and dismantled in the thirteenth century. Its site was over built by peasant houses whilst the Norman lord of the village built himself a new manor further to the north.

This second manor house stood apart from and overlooked the village. It consisted of a courtyard surrounded by a hall with solar or private apartments for the lord’s family, a bakery, brew house, kitchen, dovecot, barn and outbuildings.

Whilst pre Norman Lords were happy to live amongst their villagers, it seems that at some point, the Lord of the manor at Wharram Percy decided he needed to be spatially as well as socially separate from the rest of the village. This was an unusual move and one that only became common elsewhere in the eighteenth century.

Over a thousand skeletal remains have been examined from burials in Wharram Percy’s church yard. Dating between the eleventh and sixteenth century, they show that despite the organisation and amenities of the village, life was still hard for the villagers.

Over half the burials are of children and babies who had died of infectious diseases. But many of the bones show that the villagers who lived had arrested physical growth and development. Many skeletons of young adults show that those who reached their mid teens would often be no bigger than a modern ten year old. This is attributed to poor diet at crucial periods in childhood.

This poor diet was probably due to the intermittent failure of crops- unsurprising as the land about wharram Percy was largely unsuitable for the arable farming that dominated it in the Middle Ages. This changed in the sixteenth century when the owner of the land turned it over to the more profitable sheep farming, effectively signalling the death knell for the village.