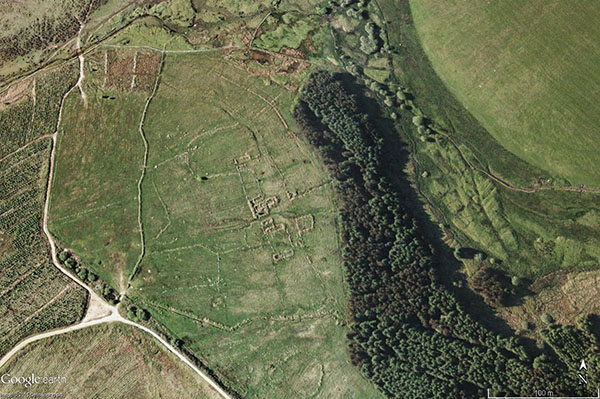 Pioneering archaeological fieldwork at Wharram Percy revolutionised the way in which deserted medieval villages in the UK were excavated and understood.

Around 3000 villages were deserted in Britain between the Norman conquest and the eighteenth century. Many lie hidden under later redevelopments. But many more were never resettled. They can be found throughout the English countryside, showing up from the air or as earth covered humps on the ground.

Wharram Percy is one of them. It is also a significant archaeological site. Archaeologists gained much valuable information about medieval life from the village. They also used its excavation to pioneer techniques that revolutionised the future analysis of other deserted medieval villages.

Wharram Percy is six miles from the town of Malton in North Yorkshire. The site was settled from prehistoric times although its name dates from a much later period. ‘Wharram’ is a Viking term which describes the bend in the valley that the village occupies. The ‘Percy’ element is later still, relating to the major land owning family of the north of England, who at one time also held the village of Wharram Percy.

The decline of the village was not due to plague or famine but to the land clearance. Families were evicted from the village as the land was given over to sheep, whose wool brought in a greater profit for the landowner than arable crops. By 1500, the once thriving village dwindled to one farm. But its medieval farmsteads, track ways and manor houses remained hidden in the landscape, awaiting rediscovery in the 1950s.
The Aerial Photography and the Archaeological Excavation of Wharram Percy

The first aerial photographs of the village were taken in 1948. They revealed the foundations of the houses, which could be seen in rows, each with a narrow strip of garden behind them.

Excavation of the site began in the 1950’s. They were the most extensive excavations of a medieval village up until that time. They were also largely carried out by volunteers, making them one of the first opportunities for non professional archaeologists to work alongside the professionals.

But the excavations were also pioneering in that they excavated a medieval village in a way that had never been tried before: by using open area excavation.

Medieval villages were usually excavated using box or trench excavation. Either the foundations of the houses were identified and excavated around or a trench was sunk to give a cross section of chronological activity.

Both methods were restrictive. A trench could not give a complete house plan, only a view of activity on a very small area of the site. Similarly, excavating around the foundations of a house only gave a house plan for the final phase of the site’s life, without giving any idea of overall continuity and change over the years.

Open area excavation was more complete. Areas of 5ft square were excavated horizontally. The finds from each layer were carefully recorded as each successive layer was excavated. In this way, house plans and finds from not one but every phase of occupation were recorded, building up a complex, overall picture of the life of each feature and the village as a whole.

The only drawback was that to get to the earliest sequences in the village’s history, the upper layers were inevitably destroyed.

The History of a Medieval Village

Destructive or not, the systematic nature of the excavation at Wharram Percy, which continued until the 1990s, brought the history of the village back to life. The life cycles of the buildings became clear and the excavations offered many revealing insights into life in a medieval village.

The techniques pioneered at Wharram Percy were applied to the study of other deserted medieval villages. But the excavations also helped many generations of budding archaeologists learn about and contribute to the development of archaeological techniques.