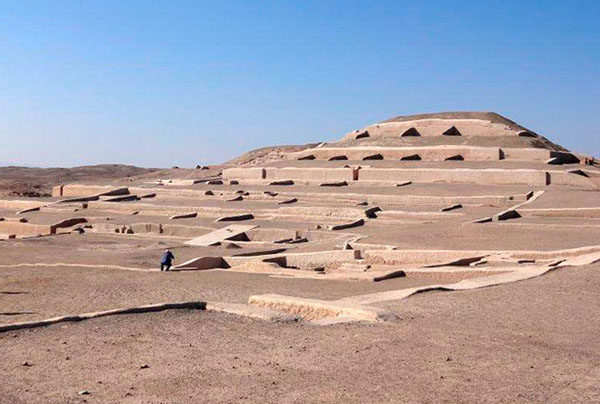 Cahuachi was an important means by which ideology was materialized into concrete, tangible culture for the Nasca civilization. This center is not only useful in learning more about Nasca ideology through the events and pilgrimages associated with it, but also in the creation of the center itself. It is important to recognize that Cahuachi not only enabled materialization of ideology as a pottery production center or a ceremonial center; indeed the creation of such a religious ceremonial center itself is indicative of materialization.

Although this site was initially thought to have been a habitation site, recent excavations reveal no such signs of habitation, instead proving that Cahuachi served as a vacant ceremonial center, according to archaeologist Helaine Silverman. To be considered a city or a habitation site, the place must have a large, dense, and permanent population with economic variety within a heterogeneous society.

It must have planned physical layout, food storage facilities, and intense specialization and craft production. Although Cahuachi does exhibit the latter two qualifications, it does not meet any of the other prerequisites and thus must not be seen as a city or a habitation site. Archaeological findings at the site present evidence for this hypothesis in the form of animal remains, panpipe, and ceramic vessels, demonstrating that group feasting and religious practices took place at the site.

Of the 40 artificial and semi-artificial mounds at Cahuachi, none show evidence of habitation as none of the mounds are divided into separate rooms and there is no confirmation of utilitarian tools found within the mounds. Virtually all surface material on the mounds at Cahuachi was non-domestic; rather, the material exhibits ritual occurrences in llama remains, bird plumage, and broken pottery. It is evident, therefore, that this site must not be understood as a habitation site. Rather, Cahuachi was likely built up over time to eventually become an important political center for the ancient Nasca.

This ceremonial center served as a means of sociocultural and political integration enabling group cohesion and offering a sense of unity. In this regard, Cahuachi can be identified as a case of non-urban cultural complexity. Cahuachi was used as a pilgrimage site, frequented by large populations of people at a certain time each year, and it was during this pilgrimage that the social and political hierarchy of the Nasca state was manifested through ritual performances and religious ceremonies.

Such displays, in the forms of feasting and performance, aided in establishing clearer identifications of where individuals fit into the social hierarchy of the society. Crucial to the process of ritual were the items produced for and used in these contexts, such as paraphernalia, ritual attire, and objects depicting religious symbols.

The Nasca Usage of Tangible Ideologies

By giving ideologies physical form, these items serve as a constant reminder of one ideology’s primacy over another. In addition, Cahuachi, as a monument and the culture capital was yet another way in which the Nasca were able to associate with a sense of place and centralization. This likely assisted in creating a stronger sense of community, while legitimating the power and importance of the elites. Thus, Cahuachi serves as an example of materialization through ceremony, monumental architecture, and symbolic objects.

Moreover, the use of such ceremony and ritual likely allowed for chiefs to reassert power and obtain support to generate wealth, especially in the form of redistribution. This wealth and power could then be used in order to appropriate creation of the geoglyphs that were used to solidify religious beliefs associated with mountain worship.

Essentially, by generating power and prestige through initial ideology in the forms of symbolic objects and ceremony, elites were able to generate more power and prestige through monumental architecture. Myriad myths in Peru demonstrate the importance of mountains and mountain gods to Andean cultures in terms of meteorological phenomena like rain, and the large geoglyphs likely served as paths to places where water rituals were performed by the Nasca.

The Family Life and Death of Tutankhamun