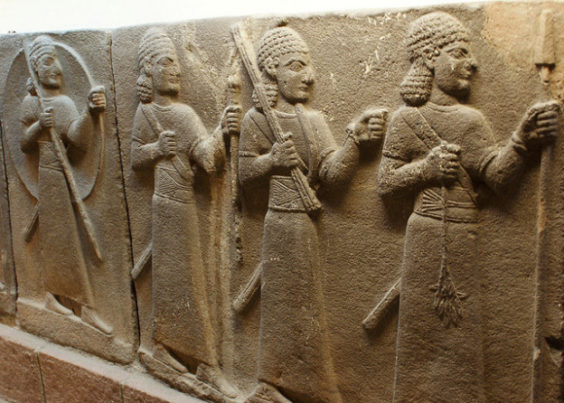 Where the Hittites an invading warrior race that conquered the Land of Hatti or where they one of the indigenous peoples of Anatolia? New research sheds some light.

For nearly seven hundred years, ca. 1600-900 B.C.E. the Hittites were a force to be reckoned with in the South Eastern Asia. With conquests ranging from the Aegean to beyond the Euphrates this Anatolian people left many archeological clues about there existence. This evidence together with a rich textual record, including the archives from their capital Hattusa, has placed the Hittites among the Great Kingdoms of the Late Bronze Age. Yet there are still unanswered questions and areas of debate.

Several problems have concerned scholars until modern times. Foremost amongst them is the theory that the Hittites were part of an Indo-European horde that invaded Asia Minor in remote antiquity. Since the Hittite language, which is properly termed Nesite, is of Indo-European origin it was widely assumed that this was the language spoken by the ruling elite if not the general populace as well.

The lack of evidence to indicate any sort of Indo-European invasion has led to theories that the language may have evolved into usage differently. Trevor Bryce in, The Kingdom of the Hittites, suggests that Nesite, named after the Central Anatolian town Nesa/Kanesh, may have already been in use as a trade language before the rise of the Hittite Kingdom. The Hittites may then have adopted it out of convenience and from inclination to follow tradition.

The Land of Hatti

The land of Hatti, located in Central Anatolia, was the heartland of the Hittite Kingdom.It was long assumed that its inhabitants were conquered by an Indo-European speaking warrior elite that established a kingdom named after the recently conquered territory. The new theory about the origin of Nesite as the official Hittite language forces this assumption to be reassessed as well.

This rugged land has no appreciable natural defenses and the Marrastiyana/Kizil River which marks its southern boundary is easily fordable. The population was in near constant threat along all frontiers. Hittite kings would be forced to adopt aggressive diplomatic and military strategies throughout their reigns as they tried to secure their homeland.

Here the climate was one of extremes, winters have been compared to Northern Germany, while summers compared to those of Southern France. Nevertheless the region did have some arable land and more importantly was crisscrossed with trade routes. Ultimately it was these trade routes that allowed the Hittite Kingdom to achieve a measure of prosperity.

The Origin of the Name Hittite

Bryce explains that the name Hittite originates in the Bible with the term (hitti, hittum) which was used to describe a tribal people who lived in Palestine during the Iron Age. When scholars like Archibald H. Sayce began to study the ruins of ancient Anatolia they connected these people to the once great empire that had once dominated the region. With the rise of the formal discipline of Hittitology the name Hittite then came into use as term to describe the Late Bronze Age empire builders as well as the people who lived further south during the Iron Age who are now conventionally termed the Neo-Hittites.

The people of the Late Bronze Age Hittite Kingdom described themselves as the “people of the Land of Hatti,” but this name provides little help in the understanding of the dominate culture of the region. Indeed, the evidence is ambiguous as to whether any culture could be considered dominant . The population of this region was diverse, a portion was indigenous but there were also Luwians from the Aegean Coast, Syrians and Hurrians from Mesopotamia as well as others from around the Near East

One explanation for how such a mixed people of different cultures and languages could be unified is revealed in their name. By denoting the geographical region, “Land of Hatti” when they spoke of themselves demonstrates that the region itself may have given them their collective identity. So that, regardless of there many backgrounds, the “people” who lived in the “Land of Hatti” were able to come together under there kings and forge an enduring legacy.