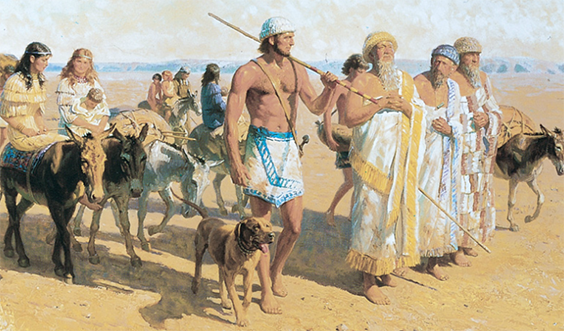 For over five thousand years people we now refer to historically as Semites moved across the ancient Near East. Their legacy is still unfolding today.

The term “Semitic” was coined in 1781 by the German Historian Ludwig Schlözer to refer to languages spoken by a group of people thought to descend from the biblical figure Shem, son of Noah. However, some of Shem’s descendants include the Elamites and Lydians whose languages were not Semitic and some of Ham’s descendants (Shem’s brother), who are seen as enemies of the descendants of Shem, spoke Semitic languages.

Semitic languages spoken today include Arabic, Ethiopic, Hebrew and some traces of Aramaic in the Syriac Christian churches where it survives for liturgical use. Dead Semitic languages include Akkadian, (old Babylonian and new Assyrian) as well as various Canaanite dialects.

What Makes A Semitic Language?

The main characteristic of Semitic languages is that all the verbs, nouns and adjectives derive from roots composed of three consonants. The insertion of the vowels gives the word its context and meaning. This type of language is called “inflected”. It is noticeably different than the Sumerian language which is of the “agglutinative” type wherein words are constructed from smaller units which then have fresh meaning.

The first evidence of Semitic speaking people appears in the way of people’s names in ancient records and goes back nearly as far as the Sumerian language in southern Iraq. These two languages shared not only Mesopotamia but many words as well. There is also evidence that scribes with Akkadian names wrote in Sumerian and even the famous Queen Puabi who was buried in the Royal Cemetery at Ur may have had an Akkadian name.

Who Were The Original Semitic Language Speakers?

The theory that Semitic speaking peoples emerged as invaders from the Arabian Peninsula to overwhelm the Sumerian culture has persisted for decades. However there is no evidence that the original Semitic peoples were any different than their Sumerian speaking neighbors except for their primary language. A great deal of bilingualism was likely ongoing in ancient Mesopotamia. Although lists of names show relatively more Sumerian names in the south in Sumer and more Semitic names in the north in what would become known as Akkad, the difference in culture between the regions is negligible.

The original spoken Semitic to enter the Ancient Near East is often thought to have come from the Arabian Peninsula in the region of modern day Yemen. However this theory is open to debate and the language may well have developed anywhere from the borders of Egypt to across the Levant.

More is known about Semitic peoples who lived in cities such as Mari in Syria than their nomadic neighbors who are often looked to as the primary Semitic language speakers. By the time of the first written records around 3,000 BCE the Semitic People were well established city dwellers but other Semitic people did continue life as nomads.

The nomads of this period however are not to be confused with the desert traversing Arabian Bedouins of later centuries who traveled with the aid of the camel. The original Semitic nomads used donkeys for transport and kept herds of sheep which were only moved between pastures in a localized region. These nomads had close connections with the city-dwellers through trade and commerce.

Many Semitic speaking nomadic individuals and families are recorded entering cities to work in specialized trades or as mercenaries. In fact a tradition of hiring the hardy peoples of the desert into the professional armies of urban civilization persisted for thousands of years in the Near East. This practice likely helped to influence the perception that the original Semitic language speakers were foreign invaders.

The Akkadians And The Rise Of The Written Semitic Language

The first known group of Semitic people was the Akkadians. They lived as neighbors of the Sumerians for untold centuries until the first major political upheaval of recorded history. Under their King Sharru-kîn / Sargon the Great, ca. 2270 BCE – 2215 BCE, the city-states of Mesopotamia and the surrounding lands were united into what is generally regarded as the world’s first empire. Sargon built a new capital city known as Agade and began to use Akkadian as the official language for royal business.

By adopting the cuneiform writing system of the Sumerians the Akkadian scribes developed the language that would later be known as Babylonian and then evolve into Assyrian. For over one thousand years the Great Kingdoms of the Ancient Near East communicated in the language imposed by the man who defined the meaning of empire. Sargon’s dynasty would last for just over one hundred years but, as it introduced the Semitic Languages to the world, its impact on history is still being felt to this day.

The most recent group of Semitic people to emerge as a political force in the Near East was the Muslim Arabs of the seventh century CE. They did indeed take over a great deal of territory through force of arms and thereby spread their language and religion. However earlier Semitic language groups such as the Nabateans in what is today Jordan and the Aramaeans in Syria appeared on the scene slowly over a period of generations. Even the Amorites, who were made famous by the conquests of Hammurabi, were an ongoing presence across Mesopotamia well before the conquests of the renowned First Babylonian Dynasty.