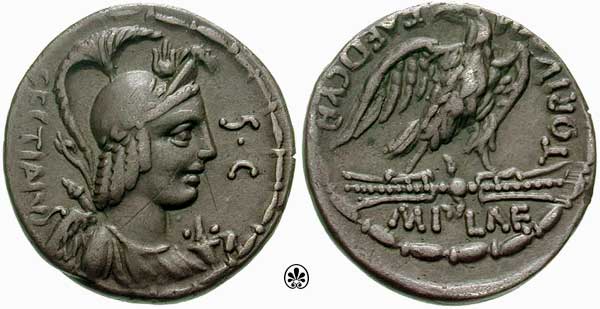 What little is known of the goddess Vacuna can be summarized in a bare paragraph:

Vacuna was a goddess of the Sabines, one of five principal goddesses in the Sabine pantheon, along with Feronia, Minerva, Velinia, and the goddess of Cutiliae. Like most Sabine deities, her public worship was in open spaces, especially clearings in the sacred groves located at the tops of certain hills throughout Sabinium. There is no known image of Vacuna, and there probably were no images or statues of the goddess, given the Sabine style of worship. Her cult probably was connected to rain, agriculture, and the harvest cycle.

The questions that remain could fill an article themselves, without a full resolution of Vacuna’s meaning to the ancient Sabines. The descriptions one is likely to read and see repeated without thought in countless web pages or printed summaries are most likely wrong. No Sabine histories or religious works survive, so the lack of evidence is a serious impediment to understanding.

First, who is she? Various descriptions attempt to associate Vacuna with Ceres, Victoria, Minerva, Bellona, Diana, or Venus. When most of these comparisons are traced to their original source, however, the links fall apart. And, clearly, she cannot be all of the above. In some cases, the associations of Vacuna with other goddesses involve the conflation of cults during the imperial era, usually for political reasons. Others are examples of fanciful etymology, common among Roman antiquarians. Often these errors are compounded by modern scholars amplifying the mistakes of classical authors.

For example, Vacuna is often said to be a goddess of leisure to whom the country laborers made offerings at the end of the harvest. In this common explanation, the name of the goddess is thought to be related to the Latin word vacare, meaning to relax or take a holiday. Unfortunately for this derivation, its only ancient source is the poet Ausonius in the late 3rd Century A.D. One also has to recall that whatever the Latin derivation of her name, Vacuna was a Sabine goddess whose original name would have been Oscan. Renaissance scholars later repeated Ausonius’ literary attribution of Vacuna’s meaning as the basis of her cult. In fact, modern scholars believe the linguistic root of Vacuna is the Latin word for lake, lacuna. Thus, Vacuna is more likely a deity associated with lakes or water, much like the other two Sabine goddesses, Velinia – goddess of Lake Velinus, and the goddess of Lake Cutiliae. Given that, of the three, Vacuna alone has shrines that have been identified from sites throughout Sabinium, it is possible that Vacuna was greater than or subsumed the other lake goddesses within her cult.

Second, what did Vacuna’s cult represent? The meaning of Vacuna’s cult was obscure even to writers of the imperial era. Horace, who famously wrote of Vacuna’s crumbling shrine near his own estate in Sabine country, did not know what the ancient goddess represented. The scholar Pomponius Porphyrion in his commentary on Horace’s poetry said that she was of “uncertain nature.”

If she was a goddess of the waters, could she also be a goddess of agriculture? It is possible that the comparison to Ceres is not wholly mistaken. Ceres was an important goddess among early Italic tribes; in some cases, she was the principal goddess. In the ceremony recorded in the Table of Agnone, written in Oscan, Ceres is the central deity, associated with rain and fertility. This tablet, a relic of the Samnites – cultural cousins of the Sabines, invokes the goddess of rain and fertility as the patron god of agriculture.

The adoption of Juno into the Religio Romana and later tendencies toward syncretism with the Greek pantheon give the cult of Ceres in the Roman imperial era an evolved identity that obscures her original Italic nature. As a redundant cult within the Roman state religion, Vacuna may have retained more of her original features. Thus, she could have continued to have been worshipped by the Sabines as a goddess of agriculture and fertility without being transformed into a Ceres-Demeter figure.

Another interesting reference links Vacuna to the state cult of Vesta. Although worship of Vesta seems to have come to Rome from the Latins, the cult’s central place in Rome’s religion is also related to the role of the early kings who happened to be Sabines. Numa Pompilius is traditionally credited with establishing the public cult of Vesta in Rome. In an interesting coincidence, the festival day for Vacuna was the fifth day before the Ides of June, the same day as the Vestalia festival. In the Fasti, Ovid also provides an intriguing comparison of the worship of the two goddesses:

Long did I foolishly think that there were images of Vesta: afterwards I learned that there are none under her curved dome. An undying fire is hidden in that temple; but there is no effigy of Vesta nor of the fire. The earth stands by its own power; Vesta is so called from standing by power (vi stando); and the reason of her Greek name may be similar. But the hearth (focus) is so named from the flames, and because it fosters (fovet) all things; yet formerly it stood in the first room of the house. Hence, too, I am of opinion that the vestibule took its name; it is from there that in praying we begin by addressing Vesta, who occupies the first place: it used to be the custom of old to sit on long benches in front of the hearth and to suppose that the gods were present at the table; even now, when sacrifices are offered to ancient Vacuna, they stand and sit in front of her hearths. Something of olden custom has come down to our time: a clean platter contains the food offered to Vesta.
Ovid, Fasti VI, emphasis added to text

One may wonder whether the cult of Vesta at Rome represents a very early example of syncretism to unite the Latin and Sabine populations of Rome. In De Lingua Latina, Varro actually states that Vesta comes from the Sabines “with slight changes.” Most of the early records of Rome were lost when the city was sacked by the Gauls; outside Rome, Vacuna would have continued to be worshipped by unconquered Sabine tribes.

Varro’s identification of Vacuna herself would be helpful. Born in Reate, he spoke Oscan, and might have been familiar with the ancient cult’s meaning. Unfortunately, Varro described Vacuna in Antiquities of Divine Things, a lost work. Nevertheless, because Dionysius of Halicarnassus generally followed Varro’s book in his own Roman Antiquities (Book I.15), it is assumed that both associated Vacuna to Nike, i.e. Victoria. Given the limited number of ancient sources still in existence, this could be true.

However, we also have to note a few contrary points to consider. First, Dionysius often attempts to explain Roman practices in Greek terms with Greek examples, not always accurately. Nike was the Greek goddess associated with triumph and victory. There is no obvious connection between the Sabine and Greek cults. One could speculate that Vacuna stood in some subsidiary position to Minerva, as did Nike to Athena, but there is no evidence for this either.

Second, in his book Dionysius is clearly referring to Nike as the goddess of the lacus Cutiliae. In other words, he identifies Nike as the deity known elsewhere by Varro and other Latin writes as the lymphae Commotiles, or the “restless” nymphs or numinae of the lake. We cannot rule out a connection with Vacuna, but it is also a leap to connect the separate descriptions of Vacuna and the Commotiles, especially since no ancient writer does so, including Dionysius. The association that is made in Roman Antiquities is between the Commotiles and Nike/Victoria. Thus, that connection may be questioned on its own merits, but it is a further leap without facts to draw in Vacuna.

As for the goddesses Minerva, Bellona, and Diana, there is no reason to confuse their cults with Vacuna. The fact is that each had their own cults among the Sabines as well as the Romans. As Varro noted in De Lingua Latina:

Some of these names have roots in both languages, like trees that have sprung up on the boundary line and creep about in both fields.

The attempt to give a “deigraphy” to each, should not require merging their identities simply because the ancient evidence is so sparse.

To conclude the study of Vacuna, the fact is we know very little. Her cult did exist throughout the Sabine territories, as the archeological remains demonstrate. She was most probably associated with water, rain, and the agricultural cycles so important to a mostly rural population. Her true meaning to those that worshipped her, however, is a mystery.