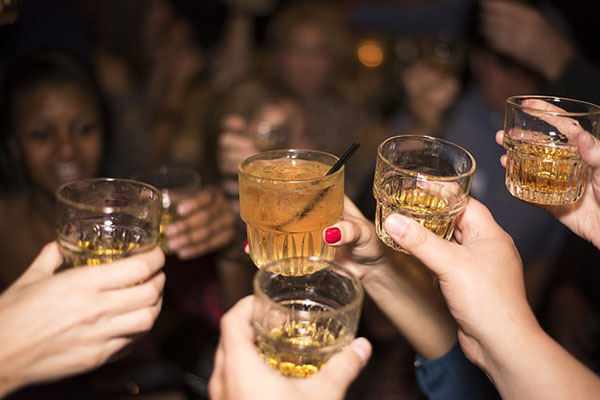 Drinking to a friend’s great success or raising a glass to honor a newly married couple has been a tradition for hundreds of years.

When you raise your glass to wish someone the best, have you ever wondered how that came to be acceptable behavior? This custom originated with the Greeks as far back as the sixth century B.C. It started with a very basic safety concern, to assure the party goers that the drink they were about to consume was not poisoned.

Wine, with poison, had long been used to get rid of enemies or even to get rid of an unwanted spouse. So to alleviate the fears of the guests the host would sip first from the decanter, and satisfied of the purity of the drink, the guest would then all raise their glasses. Therefore this drinking in sequence, with the guest following the host, soon symbolized a pledge of amity and trust.

The Romans quickly picked up on the Greek’s use of poisoningLivia Drusilla, an empress of Rome during the first century B.C., became famous for the art of poisoning people who annoyed her.

The Romans dropped a piece of burnt toast into their drinks, hence the term “toasting”. Historians thought for years that the toast was a piece of sugared bread added for sweetness. But recently it was shown that charcoal can reduce a liquids’ acidity. So therefore a piece of blackened bread (charcoal) can make an inferior, slightly vinegary liquid mellower. While historians believe the toast in “toasting” come from this practice, our word for “toast” comes from the Latin work “toastus” meaning parched.

So from the Greeks we gained testing wine for poison and lifting glasses in unison to signal safety and from the Romans came the habit of dropping toast into the glass. These two habits started the habit of toasting at gatherings.

The Toast of the Town

However in the early eighteenth century, this tradition took a new twist. Celebrators at gatherings would raise their glasses in honor of a beautiful or celebrated person instead of toasting the gathering. This is where the term “toast of the town” came into our vernacular. In a 1709 edition of The Tatler, Sir Richard Steele mentions that British men were so used to raising their glasses to the beautiful women of the time that they called the lady mentioned, “the toast”.

In the next century, toasts became the norm. A dinner was rarely held without glasses being raised to toast someone. A British duke wrote in a paper from 1803 that “every glass during dinner had to be dedicated to someone.” It went on to state that to omit toasting was considered “sottish and rude, as if no one present was worth drinking to.”

So at your next gathering or family dinner raise your glass and toast someone you feel is worthy.