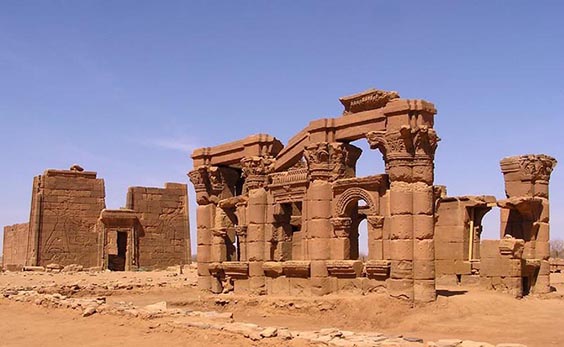 The Kingdom of Kush regained power and wealth during the Meroitic period. They benefited from abundant gold and iron ore deposits which contributed to successful trade.

In the 600s B.C. the Kushites were defeated by the Assyrians and lost their control over Egypt. The Kushites then retreated to the African interior where they set up a new Capital at Meroë, which was situated along the east bank of the Nile River.

This new location proved to be fortuitous, as it was rich in natural resources such as gold and iron ore deposits, forests of ebony, and other woods. At Meroë the Kushites were able to develop a successful iron industry and trading network.

The Meroitic period in Kushite history lasted from about 200 B.C. to 350 A.D. During this time, the Kingdom of Kush thrived as a powerful producer of iron weapons and tools, and also as formidable trading partners with neighboring kingdoms. They traded along the Nile River to Egypt, and their goods reached ports all along the Mediterranean Sea and the Red Sea, Southern Africa, and quite possibly as far as India and China.

However, many aspects of the Kushite culture were unique to their society. For instance, many of the citizens of Kush lived in houses made of interwoven palm branches and brick whereas the Egyptian populations mostly lived in mud brick style houses. In addition to Egyptian gods, Kushites also worshipped their own lion-headed god Apedemek. They also came up with their own form of written language, Meroitic.

Roles of Women in Ancient Kush

Unlike in Egypt, women were equal contributors to men in the Kushite society. For instance, women worked alongside men in the fields in addition to caring for the home and children. During times of war, women would go to battle alongside men as well.

Women in Kush could become priestesses and even Queens. King Piankhi made his sister a priestess. Many royal families followed suit and named their daughter princesses, priestesses as well. Some women were co-rulers with their husbands and sons such as Queen Shanakdakheto (Shah-nahk-dah-kee-toh). Queen Shanakdakheto ruled the kindom alone from 170-150 B.C. Historians believe that she became ruler after her husband or father died.

The Ancient Civilization of Kush Declines

The kingdom of Kush reached its height around 100 B.C., but by about 300 A.D., the empire had totally collapsed. Many forces inside and outside of the kingdom contributed to Kush’s demise. Kush suffered a loss of natural resources which led to a loss of trade. This left Kush weak, and vulnerable to attack.

It is believed that Kush overgrazed their cattle, leaving the fertile farmland vulnerable to erosion. Additionally, the forests around Meroë were over harvested in the making of iron weapons and tools. As forests were depleted, furnaces for making iron weapons and tools were shut down, and the iron industry of Kush was soon extinguished. As Kush lost its economic power and trading abilities, many traders started going around Kush to other Kingdoms. A new trade route actually bypassed Kush in favor of Aksum, a nearby kingdom.

The neighboring kingdom of Aksum, which was located southeast of Kush on the Red Sea became more powerful from trade while Kush was becoming weaker. By the 300’s A.D. Kush had a weak military and had lost most of its wealth. Around 350 A.D. the Aksumite King Ezana sent his army to conquer Kush, and destroy its capital at Meroë.

During the 300’s A.D. the rulers of Aksum adopted Christianity as their new form of religion, and this new religion changed the culture throughout the region of Nubia. Therefore, the last influences of the Kushite culture faded and disappeared.