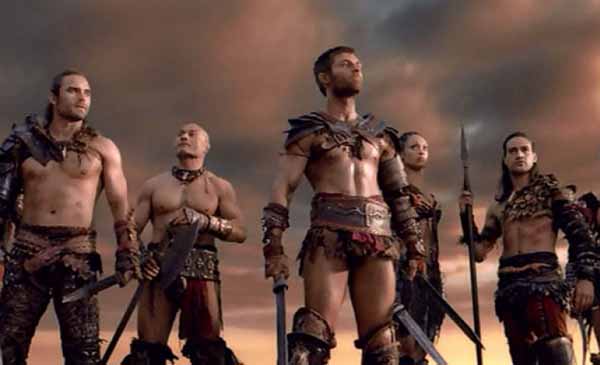 Not much is known of Spartacus’s early life. He served in an auxiliary unit in the Roman army – probably as a cavalryman, since the Thracians were famed for their skill with horses – and then deserted and became a bandit. This led to his subsequent capture and captivity as a gladiator.

Spartacus was a murmillo. In the arena, he fought with a scutum and gladius, just like a Roman legionary. Ironically, the chief opponent of the murmillo was another type of gladiator called a thraex ( thracian). Although his gladiatorial record is unknown, ancient writers stress Spartacus’s great strength and skill.

The ludus (school) which Spartacus belonged to was in Capua, in southern Italy. Capua enjoyed a warm climate and was reckoned the best place to train gladiators. It also had a massive slave population, which worked on the great estates owned by wealthy Romans.

Spartacus and his fellow gladiators – most of whom were foreigners, like himself – fought their way out of their ludus with cleavers and fire irons before heading to mount Vesuvius, about twenty miles away. It made sense to hide, and at this point it is unlikely that Spartacus harboured any thoughts of revolution. From their hideout, his band plundered the surrounding countryside. Bandits were nothing new to Capua but Spartacus and his men, with their gladiatorial training, must have been a good deal more dangerous than the average highwayman.

Word began to spread, and followers began to scale Vesuvius to join his outlaw band. With most of Rome’s Legions away fighting distant wars, Praetor Claudius Glaber was despatched by the senate to deal with what was rapidly becoming a slave uprising. He and his force of 3,000 besieged Spartacus on Vesuvius, but the rebels descended the mountain at night and took the Romans by surprise. Following this success, even more slaves flocked to his cause.

Rome then depatched two legions under the command of Publius Varinius. Over the course of three separate actions, Spartacus defeated the romans. Each victory brought in fresh recruits, and vital supplies of weapons, armour and food. But Spartacus and his motley army had yet to face a proper Roman legion – all troops sent against them thus far had been militia.

It was this point that Spartacus decided to head north toward Gaul.The senate, thoroughly alarmed now, sent four crack legions against him. Another leader of the revolt, a Gallic gladiator named Crixus, was defeated when he parted ways with Spartacus in an attempt to capture Rome. Spartacus once more managed to inflict crushing defeats on the Romans sent against him. But with the way to Gaul (and freedom) now open, he abruptly turned around and headed south again. Why he did this remains a mystery.

He and his army were finally hounded into southern Italy by eight legions under the command of Marcus Lucinius Crassus, and defeated in an epic battle in the valley of the Silarus. 6,000 prisoners were crucified along the Appian Way. Of Spartacus himself, it is believed he died fighting. His name is still synonymous with freedom.