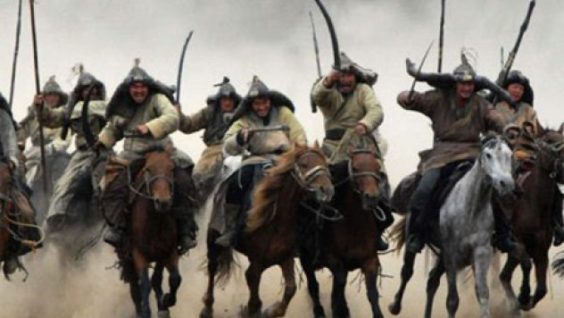 The typical Mongol lifestyle centered upon the life of a war-like nomadic herdsman. Their herds consisted of cattle, horse, sheep, camels, and goats, which they roamed the steppe with, always in search of new grazing lands. Finding a particular tribe would have been guess work, as the Mongols roamed freely and moved frequently about the steppe region. A preoccupation with basic survival, within a harsh environment consisting of blistering summers and bone chilling winters, created a people who had become experts with survival techniques; techniques that would be considered cruel by today’s standards. They were quick on their feet enabling them to handle the difficult aspects of their location and lifestyle. They displayed a thirst for knowledge and had insatiable curiosity. Before the onset of the winter season, the Mongols with their herds and possessions would relocate south to warmer grazing areas. When the snow melted, they would return to the north to flee the heat.

The Mongols were totally dependent upon their herds. The animals were their most valuable possessions. These animals provided the main foods for consumption such as meat and milk. Wild animals were also a large part of the Mongol diet. Animals hunted for food ranged from deer, wolf, fox, and mountain sheep. Horse intestines were turned into sausage and eaten fresh. The Mongol herds also provided hides for clothing, quivers for arrows, and hides for armor. Bone was used to create tools and weapons. The sheep and goats provided wool for clothing and felt. The Mongol horse was strong and stocky with a thick coat for winter and capable of long journeys without rest.

The physical appearance of a Mongol was seemingly comical. They were short, with heavy stout bodies, and bowlegs from horse riding. Long, pierced ears along with prominent check bones complimented large, round heads. Skin was tanned by harsh weather. The most desirable Mongol women were a little thick in the mid -section and had small noses. Beauty was important for these women and many would cut off all or part of the nose to seem more attractive. Black was a prominent color of ‘make-up’ for the Mongol woman. She would also use loud colors. Genuinely virtuous in regards to promiscuity, Mongol women did use strong language in a good natured manner. Strong cultures breed strong women as the Mongol woman would only give birth crouching or standing, probably swearing. As in many cultures, a Mongol man could have more than one wife. The husband and father held most of the power within the family, but the wife’s or mother’s family was shown a large amount of reverence.

The religion of the Mongols was similar in concept to that of the Native Americans. Nature, both an admiration and fear of, held the center of the religious beliefs. The number of Mongol gods was infinite. They worshipped fire as a cleansing element and would not pass a knife through the flames for fear of beheading the flames and taking away the power fire projected. They had a fear of lightning and if anyone was killed by lightning all the possessions of the dead person were considered unclean and no one would dare touch them.

The Mongols were prejudice and looked down upon any non-Mongol. They displayed little patience or honesty with foreigners and were disrespectful to visiting dignitaries. Heavy drinking was a common, acceptable practice. Greed was a strong element in a Mongol life.

The Mongols were divided into clans, called omuk. Those were divided into sub-clans, called yasun. Clans would often merge into tribes or small nations, called ulus. This structure of Mongol life would see constant change over the years as tribes and sub-clans would be formed and reformed. Clan administration would be instrumental in the development of Mongol law. The Mongol people were respectful of their laws and leaders.