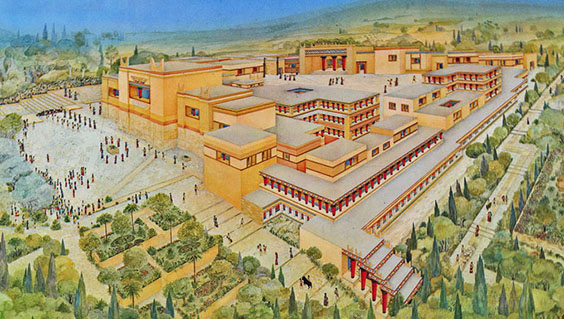 Influenced by Egypt and the Ancient Near East, Minoan culture represented a uniquely different civilization seen in the ruins of the palace in modern-day Heraklion.

The ruins of the great ancient city Knossos in modern-day Heraklion on the island of Crete barely convey the prosperity and commercial power of an ancient Mediterranean civilization that dates to 7000 BC. Identified with the legendary king Minos, Minoan civilization flourished as a trade crossroad between Egypt, the Near East, and Greece. Perhaps the most intriguing aspect of the civilization was the Knossos palace, identified with the fabled labyrinth built by Daedalus to house the Minotaur.

Knossos as the Dominant City-Kingdom

The first palace at Knossos was begun c 2000 BC and later destroyed. The ruins at Knossos today reflect the rebuilding, which took place ca 1700 BC. At that time, Knossos was either the dominating center of other city-kingdoms on Crete, a type of confederation, or it presided over a unified Cretan kingdom. Scholars of Minoan history divide on this point.

The palace itself was the focus of the community and was built outward. Containing vast storehouses and workshops, the remnants of which are still visible today in the ruins, it was a repository of grain, olive oil, and other natural resources to be used for trade purposes, as emergency stocks in times of war, or to feed the community during periods of poor climate conditions resulting in agricultural downturns.

The palace also served as a temple, one wing dedicated to the Mother Goddess; female deities in the Minoan civilization represented greater prominence than in other ancient cultures. Scholars have pointed out that the king followed the Mesopotamian model of ruler-priest. Yet, unlike Egypt or Mesopotamia, no great temple structures existed in Crete and there was no extended priestly class.

The ruins have produced substantial evidence of on-going trade with the Near East and Egypt. The Egyptian influence particularly is seen in Minoan art and architecture: the labyrinth itself having been inspired by an Egyptian tomb. From Byblos and Tyre a crude early alphabet – Linear A, was adopted for commercial record-keeping. Commerce with Greece brought Linear A to the Mycenaean culture.

French historian Gustave Glotz has explored the curious ritual of “bull dancing” or “bull hopping” depicted in ancient Minoan frescoes. Minoan youths, both male and female, grabbed the horns of charging bulls and “leapt” over the wild animals in the process, a ceremony that might have impacted fertility rituals. Other scholars suggest that bull dancing was merely a sport, purely for entertainment. There is also the hypothesis that the ritual occurred every nine years, coinciding with the myth of sacrificing virgins to the Minotaur.

The Minotaur figures prominently in the Greek myth of Theseus who sailed to Knossos in order to lift a curse placed on Athens by King Minos. With the help of the king’s daughter, Ariadne, he slew the beast, thereby ending the curse, and returned home with Ariadne. While there is no happy ending in this story – Ariadne is “jilted” and left on her own and Theseus’ father commited suicide thinking that his son had failed, the myth helped Greeks to better understand the decline of Minoan hegemony in Attica.

The final destruction of Knossos and the great palace was in 1375 BC, perhaps resulting from volcanic and seismic activity. Not until 1899 was the historical corroboration for Knossos unearthed by British archaeologist Arthur Evans. Through his efforts, the mighty palace once again stood in daylight. Visitors today will not be disappointed by the scope of recovery.

As to the labyrinth, there is little evidence in the ruins – a major disappointment to visitors that are drawn to the myth of the Minotaur. Some scholars have suggested that there was no labyrinth under the palace to begin with and that a nearby cavern – Skotino, was the actual site of sacrifices. Regardless, Knossos was certainly one of the great ancient cities; as Homer states in Odyssey, “…the great city, where Minos was king…and conversed with great Zeus.”