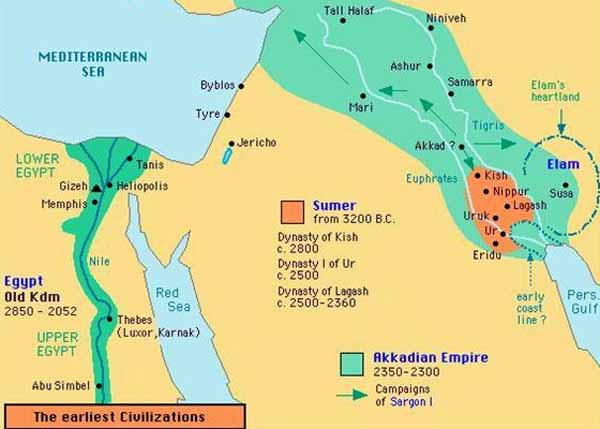 Egypt and Mesopotamia developed within close proximity and time frames to one another, but in drastically different ways. Part of these differences was due to geography, part was due to law codes, and part was due to social structure and government. Both civilizations followed a similar pattern in their origins, but diverged as they became more complex.

Domestication of animals was crucial in taking wandering nomads and rooting them to one spot.

Soon they would learn to stray even less with the advent of agriculture and the constant care required by it. Wheeled carts, sailboats, the smelting of metal, irrigation, and calendars all contributed to the stability required by agrarian life in small communities.

The founders of new settlements eventually became kings of nations. With specialized diversity allowing various roles to be developed in the community, religion became a powerful culture all its own. Priests exercised various levels of control in the small and large cities where they resided and theology frequently guided political thought.

As the kings and priests wished to exert authority, internal policing units were created to enforce the laws of the authority figure. Eventually the police diversified to a military force for protection against rival nations. Stability and security ensued for those with an armed force that could protect the borders.

Society was made more complex by the development of trade, which naturally led to diplomacy between nations. Writing and the advent of currencies helped to promote business and education. And with the new interactions among different cultures of the ancient world came tolerances and variety, as well as misunderstandings and violence.

Life in cities also changed socially. No more did everyone know everyone intimately as in the pastoral village. Now you spoke with someone only as an interaction requiring services or goods. Relationships became compartmentalized and partial. However, unlike village life, which promoted conformity, large cities promoted new styles and technologies, and culture developed as a result.

There were differences as to the role of nature between Egypt and Mesopotamia. Due to the predictable seasonal flooding of the Nile, the farmers in Egypt welcomed the event. Likewise they spread out along the river and government was decentralized as one moved further from the capital. As a result, the people of Egypt were more relaxed and seemed to have an easiness about them as the Nile faithfully brought them abundance.

In Mesopotamia the atmosphere was different. The flooding of the rivers was sporadic and deemed the anger of the gods manifest. Cities were more centralized and compact, with winding streets and multi-floored residential housing. Nothing of this type was found on the Nile floodplain. The residents of Mesopotamia seemed to live a more hectic and uncertain life than those of Egypt and the government had direct and immediate control over the lives of the citizens.

The history of Egypt and Mesopotamia show how geography can affect the progress, direction, and even social life of a civilization. Although they developed at similar times and in similar locations, they grew to become drastically different within close proximity and time frames to one another, but in drastically different nations.