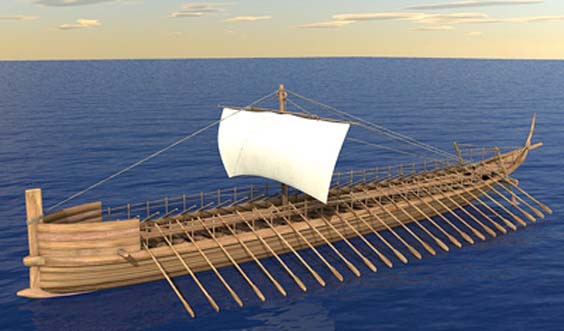 By considering evidence available from marine excavations, artefacts from tombs and fragments of pottery, it is possible to trace the development of shipping in Cyprus.

Although never achieving the nautical eminence of the ancient Greeks and Phoenicians, the early Cypriots were nevertheless able and experienced sailors. Their island was geographically positioned at the crossroads of the ancient trade routes. It was thickly forested and trees were extensively felled for shipbuilding. Protective bays forming natural harbours were plentiful.

The largest and busiest ports were Salamis (between the eleventh and fourth centuries BCE) Kition (an ancient Phoenician city) Amathus and Paphos. Lapithos on the north coast had shipbuilding yards and a harbour. Marion on the north-west peninsula was the closest port to Greece and Karpassia was closest to Phoenicia.

The ancient writers Eusibius and Efstathios both described the Hellenised Cypriots as ruling the seas, likely referring to the eighth century B.C.E. – just before the island was successively conquered by the Assyrians, Egyptians and Persians. A History of Cyprus from the Neolithic to Roman Period 1992 even says during the reign of Assyrian King Sennacharib, Cypriot sailors were known plying up and down the Tigris River!

Cypriote vases have been found in large numbers on Rhodes and Crete and Mycenaean and Minoan pottery has been found in Kition and the Hala Sultan Tekke on the south east coast of Cyprus.

Further afield, Cypriot and Aegean pottery has been discovered on an island close to the Egyptian-Libyan border, where Cypriot trading ships could take on fresh supplies and water.

Copper ingots from Cyprus have been discovered in Sardinia and Cypriote pottery on the east coast of Sicily, at Thapsos.

Their nearest neighbours, the Phoenicians were a great sea-faring nation trading luxury goods from the East even as far as the Atlantic coasts of Spain. They established colonies at strategic locations along their trade routes. One such settlement was the city of Kition on the south coast of Cyprus which was ideally situated to link the ports of the Levant with the rest of the Mediterranean.

The Phoenician conquerors with their vast sea-going experience contributed greatly to the Cypriots’ naval technology and in return they reaped great wealth from the island’s exports of cereals, olive oil, cypress and pine wood for shipbuilding and copper. Apart from being a commercial port, Kition’s strategic position afforded excellent protection for the Phoenician warships and in later centuries for the Mediterranean naval fleet of the Persian world power.

The International Symposium CYPRUS AND THE SEA of 1993 refers to the shipwrecks of CapeGelidonya and Uluburun (14th – 13th centuries B.C.E.)) near the south-western coast of Asia Minor to illustrate the vast wealth of commercial exchanges between Cyprus and Levantine countries – copper, large pithoi of Cypriote origin, fine Cypriote vases, ivory, glass and metalwork.

Cyprus expected luxury goods in exchange for her large shipments of copper. The large number of luxury items plus the presence of large numbers of clay models of ships found in tombs are indications of extensive sea trading by the Cypriotes.