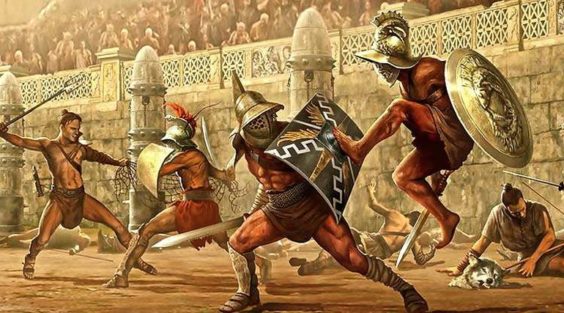 Conscripted to fight in the arena, the Roman Gladiator could be just about anybody from anywhere.

Criminals, prisoners of wars, slaves, volunteers, Britons, Spaniards, Gaels, males and even females could all end up fighting for the pleasure of the crowd in the empire’s cities.

Some sources, like the slaves and convicts, were always accessible. Others, however, became more available at different times. From about 31 BC to 180 AD, the era of the Empire’s growth, captured soldiers were well represented among the gladiators.

Free men volunteered to be Gladiators

In bad economic times such as the Crisis of the Third Century, from roughly 236 to 284 AD, the number of Roman citizens who volunteered to participate in the games would increase. Such a move made some economic sense, for a gladiator was fed nicely, received first class medical care and could win freedom if he fought well. A gladiator who survived could do very well, indeed: Mark Anthony appointed former gladiators to his personal guard and Nero, a gladiator named Spiculus possessions and wealth that rivaled those of any Patrician. Another benefit a gladiator could and did receive was that of a liaison with a free woman, many times even a Patrician.

A particular good time for volunteer gladiators was the time of the Principate, from Augustus to Nero, when the emperor was beginning to establish his autocratic rule. Even though many of the trappings of the Republic were still valid, the emperors were beginning to treat all Romans as slaves. May members of the elite chose to fight as gladiators as a sign of protest while others were simply forced by the emperors into servitude to show the new power of the crown. Even though the former citizen had to live like an average gladiator (He/she was branded, chained and was treated like a slave) it is estimated that as many as half of the gladiators in service at any time could be volunteers.

It should be also clarified that gladiators were not necessarily killed in the arena. To begin with, the fighting man required a heavy investment from the lanistae (the owner and or manager of a gladiator group) and he would not like to see his investment disappear that easily.

The authorities and or the crowd could very well pardon a favorite fighter or the defeated gladiator may well ask for and receive reprieve from death, especially if he had fought well.

Some emperors decided to fight in the arena to gain popular support or to show that they could behave in ways no ordinary citizen could. Emperor Commodus is said to have fought over 700 times in the arena. His matches were arranged so he always fought from a vantage point and he could not be seriously harmed.

There is substantiation that it was prevalent for women to fight as gladiators, at least between 193 and 211 AD. The emperor Septimius Severus proscribed women’ combat in 200 AD.