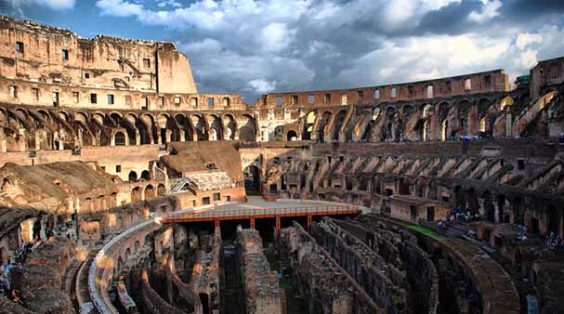 Rome, the ‘Eternal City’, continues to amaze after more than two millenia at the centre stage of world culture and civilisation. A large part of that incredible legacy is due, of course, to the ancient Romans who built their whole world and shaped so much of the Mediterranean from this city. It is therefore beholden on any enthusiast of ancient Rome to seek out in pilgrimage the Italian capital’s numerous Roman monuments.

Often, however, the trip may be brief. Unfortunately brief, sometimes, and that subtle curfew on unnaturally long glances at a fragmentary column would do well sometimes with a bit of planning. What are the top sites for the visitor to Rome intent on her antique past? It would do well to have a must-see list. The present writer cannot by any means claim such the sort of deep and broad knowledge of Rome to make a definitive compilation – he has anyway visited these places, and they are besides hot spots in historical guides.

1. Colosseum and Arch of Constantine

There could be fewer overly stated facts – a trip to Rome would be incomplete without the Colosseum. Quite possibly the city’s most prominent and famous attraction, for historians and non-historians alike almost since the end of the Roman Empire, the Amphitheatrum Flavianum, as it was called originally, built by the Flavian emperor Titus, stands the grandest monument to Rome’s gory and cruel history, but also to the magnificence of her art and architecture. Just next to the Colosseum is the Arch of Constantine, probably the largest triumphal arch in Rome, which was erected by the first Christian emperor in the 4th century. Many of its reliefs, while stolen from the earlier arches of Septimius Severus and Titus, provide a suitable complement in the shade of the gigantic amphitheatre.

2. Forum Romanum and the Imperial Fora

Just a few minutes from the Colosseum valley, down the Via dei Fori Imperiali, are the ruins of the ancient forums of Rome. Much of the original site has been built over in the course of the centuries – not least by the road itself – but the main forum, which dates from the early Republic, and the imperial forums of the Flavian and Antonine periods, still offer in their entirety a good day’s viewing. They are both open to the public for a fee, and contain a plethora of remains from the superstitious days of earliest post-regal Rome to late antiquity – one will find the Lapis Niger (black stone), which might reflect an early archaic cult, just metres from the 7th century column of Phocas.

The imperial forums, of Nerva and Trajan especially, date from the period of Rome’s imperial height in the 2nd century AD. The markets built by Trajan, an ancient supermarket of sorts, is still to be seen, a large colonnaded semi-circular facade fronted by the impressive plaza just outside it, which is still crowned by Trajan’s column; the column which did commemorate in the early years of the 2nd century AD the victories in the Dacian Wars, and which today still inspires awe in all visitors.

The ancient circus of Rome, where chariot-races were held, was probably one of the largest such structures in the Roman world. It was conveniently located right under the Palatin Hill, affording the emperors the best view of the festivities. It is now just something of a mound and largely grass-covered, although there are some later structues at its south-eastern corner that have been unearthed. It is spectacular for its sheer size – one might estimate a crowd of several thousands just from its length and the depth of its sides where spectators would have sat – and also for the continuity of its use, in the 21st century, as sometimes the starting point for the local marathon in Rome.

The Pantheon, which was a temple dedicated to ‘All-gods’, the literal meaning of the originally Greek name, was built by the emperor Hadrian in the 2nd century AD. Notable for being perhaps the best preserved Roman temple in Rome today, it was later converted into a church, and now houses the remains of the first kings of Italy, Vittorio Emmanuel II and his son Umberto I, as well as of the painter Raphael.

The Pantheon’s remarkable quality lies in the state of its preservation – the dome, designed by the architect Apollodorus, still remains more or less as it would have been when first completed, and the majority of the original architectural structure of the building is intact, while having been restored on several occasions over the centuries. The imperial dedication from the 3rd century AD still proudly remains on the temple’s frontal frieze.

5. Altar of Peace and Mausoleum of Augustus

Sitting right along the Tiber River is the Ara Pacis Museum, which now houses the remains of the ancient Altar of Peace, erected by the first emperor Augustus in the 1st century BC. Its friezes and sculptural decorations are among the best to be found of ancient Rome in the modern city, attempting as it does to encapsulate the essence of Roman religion and imperial peace in its images. There is also a reproduction of the Res Gestae Divi Augusti on one of the side walls of the museum outside.

Across from the Ara Pacis Museum are the remains of the Mausoleum of Augustus, the massive rotund structure that housed the remains of several members of Augustus’ family, and the emperor himself naturally. Its imposing brickwork would have provided a prototype for the later mausoleum of Hadrian, which now is known as the Castel Sant’Angelo; yet the Augustan mausoleum was never converted so radically into a fortification as the latter, and still retains much of a mystique and ghostly grandeur redolent of heavy antiquity.