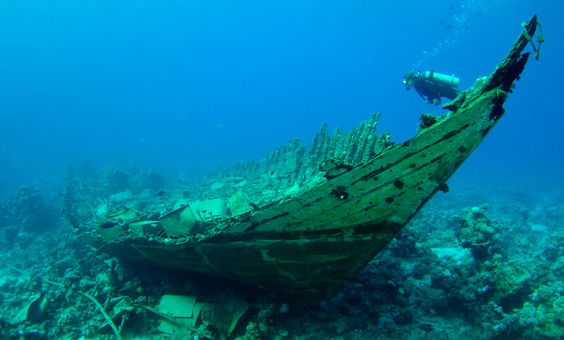 The coast of Ventotene in Roman times was part of an important trade route. It was also notoriously dangerous to ships. In 2008, archaeologists found five trade ships that fell victim to the perils of the area. Well preserved with almost intact cargos, they are perfect for the study of Roman trade and vessels during the imperial period.

The ships were discovered submerged off the coast of Ventotene, an island on the Italian coastline, situated between Rome and Naples. The area is notorious area for sudden storms and its dangerous currents.

The ships were discovered 150 metres under the sea by a team of archaeologists exploring the area for potential sights of interest in an attempting to forestall looters who have been plundering the area of treasures and destroying valuable archaeology.

These undersea features turned out to be five roman trade ships wrecked between the first century BC and 5th century AD.

The earliest of the ships was 18m long and 5 metres wide. Dated to the first century BC, it was carrying a cargo of Campanian wine. Many of it’s the amphorae were intact and remained in their original positions.

Three of the ships dated to the first century AD. The largest two ships were both carrying a mixed cargo from Italy. Goods in the largest included wine, glass wear and metal whilst the other carried mortars for grinding grain and Campanian wine.

The final first century ship was travelling from Baetica in Spain, as indicated by its Spanish amphorae. The cargo was Roman fish sauce or garum.

The final ship was sunk in the fifth century AD. Well preserved, was again carrying a cargo of garum but this time it originated from North Africa. This ship was also the smallest vessel at 12mx4m

Other finds on board the ships included kitchen equipment

The wrecks and their cargos are important because they are extremely well preserved. The ships sank without capsizing, preserving much of the cargo in situ. Once sunk, the wrecks have been preserved from breaking up by the current less deep waters off Ventotene.

This makes them the perfect subjects to study in relation to roman trade, particularly as they are situated on what was a major trade route between Rome and North Africa.

For now, the wrecks remain beneath the sea although some of their finds have been recovered and put on display in Ventotene. In 2010, archaeologists intend to return to the site. They aim to continue profiling the sites of the five shipwrecks, to discover and record the exact extent of the sites as well as scanning the sea bed for further shipwrecks