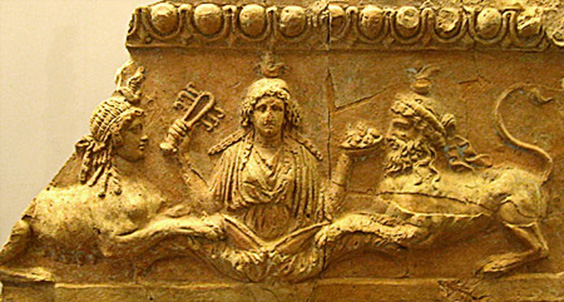 The Cult of Isis, long identified with Egypt, spread through the Mediterranean first through Greek Hellenization and later through the patronage of Roman emperors.

She was known as Stella Maris to the mariners sailing the Mediterranean, a Mother-Goddess of the ancient world whose cult would last well into the 6th Century AD. The “goddess of many names,” or, as Historian Michael Grant writes, the “Goddess of Ten Thousand Names,” was the Egyptian Goddess Isis, wife of Osiris and mother of Horus the Younger, often depicted in images and statues holding the infant close to her breasts. Isis conquered Rome in the 1st Century after decades of rejection and outright persecution. Yet her cult would become one of the strongest, reaching into pagan barbarian culture.

The story of Isis was well known throughout the ancient world, introduced to the Greeks through early centuries of trade and commerce. In the 5th Century BC Isis was worshiped in Piraeus by Egyptian merchants; within two centuries a temple honoring her was built on the Acropolis. Hellenization further expanded and enhanced the prestige of the cult, particularly through the Ptolemaic Dynasty in Egypt after the death of Alexander.

Sociology professor Michael Carroll states that Isis was a “precursor to the Virgin Mary” and suggests that she may represent Carl Jung’s “mother archetype” along with other female goddesses like Demeter and Cybele. Associated with the Nile, temples in her honor used Nile “Holy Water” during rituals and devotees often kept such water in their homes.

During Rome’s republican period, Isis was confined to household chapels. Both Augustus and Tiberius, at the start of the Imperial period, destroyed her temples. Although scholars differ on what actually occurred in the temples in regard to sexual practices, promiscuity, whether real or rumored, was frequently associated with the temples of Isis.

The Patronage of Emperors

Officially sanctioned devotion began with Caligula and grew as future emperors became enamored with everything that was Egyptian, but particularly the cult of Isis and Serapis, the Hellenized Osiris. Vespasian, visiting the Egyptian oracle at the start of his reign, heard the oracle confirm him as emperor even before the Roman Senate had done so.

Commodus, the son of Marcus Aurelius – who did not subscribe to the cult, shaved his head and actively took part in rituals and processions dedicated to Isis and Serapis. By the 3rd Century AD the cult was highly popular and carried by the legions to the empire’s frontiers where barbarian groups adopted Isis, a phenomenon that puzzled the Roman historian Tacitus, who found the Suevi sacrificing to Isis, an “imported worship.”

Isis and the Coming of Christianity

Under the Emperor Theodosius, Christians in Alexandria, Egypt destroyed the great Serapeum, hacking to pieces the statue of the god and in the process gaining new converts. By 535 the Cult of Isis and Serapis was banned and abolished, although it continued secretly.

The Many Names of Isis

Because of her all-encompassing nature, Isis was known by many names: “Lady of Abundance,” “Lady of Bread,” “Lady of the Waves.” According to anthropologist James Frazer, Greek inscriptions referred to her as “the myriad-named.” Because she was also associated with introducing grain to her husband Osiris, she is often called a “Corn Goddess.” Romans celebrated this part of her nature with a great festival on March 5th. This coincided with the Egyptian season of shemu or harvest (April-May).

The cult of Isis may have influenced early views of the Virgin Mary, at least by less literate societies making the transition from paganism to a Christianity still in its infancy theologically. Whether true or not, the cult of Isis represented a human desire in religion to identify a “mother” or “female” figure tied to fertility, harvest, and the afterlife.