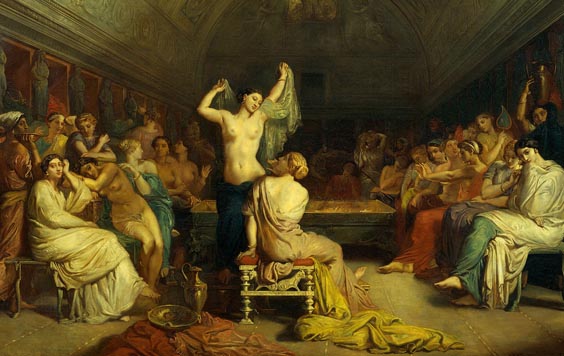 Mt. Vesuvius buried Pompeii, and a chronicle of Roman life frozen in time. Excavations have unearthed a wealth of information on the life of Romans, notably the women.

The Roman city of Pompeii is a legendary, almost fabled place in the chronicles of ancient history. It is most famous for being buried under a blanket of ash from the August 24, A.D. 79 eruption of Mount Vesusvius. When excavations on the ruins of Pompeii were begun in 1748, it was quickly discovered that the site was archaeological pay dirt. The subsequent excavations, which continue today, have uncovered an era of history frozen in time, an opportunity to see the day-to-day life and operations of a Roman city. The spectacularly preserved city has provided archaeologists insight into Roman art, architecture, politics, religion, and family life. It also offers a peek into the lives of non-Imperial Roman women, and the opportunities that were possibly available to them.

There is vast evidence that shows what the lives of the Imperial Roman women were like. The wives, mothers, sisters, and daughters of the Roman Emperors were often well documented in art, drama, and poetry. Often, little specific information is known of the other Roman women. That is, the women from the non-Imperial upper classes all the way down the social stratum to the slaves. Discoveries at Pompeii have helped to clarify a lot of notions held regarding the lives of Roman women.

Art, architecture, and graffiti have provided a huge source of interesting information. Archaeological evidence from Pompeii shows us that Roman women were not solely relegated to the job of homemaker. They had ample opportunities to participate in commerce, religion, and politics. There is evidence of Pompeian women holding down such occupations as weavers, landladies, salespeople, butchers, doctors, and even wealthy benefactors. The discoveries at Pompeii also uncovered some evidence of the independent status that some Roman women possessed. However, archaeological evidence can only tell so much of the story. We will probably never know the true extent of the independence that some of these women were permitted that was exclusive of male involvement. But what evidence that has been found provides a glimmer of hope that Roman women were not completely repressed or disregarded, at least in this one small Roman city.