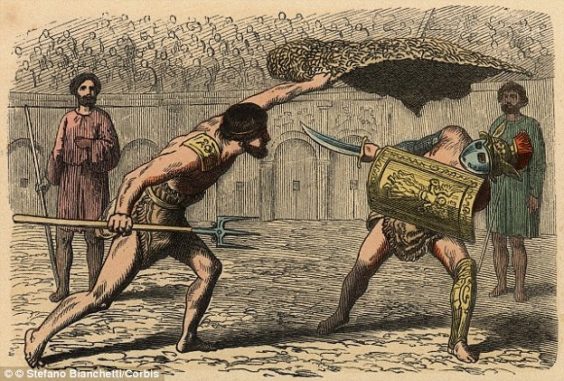 Roman gladiators can be classified in various ways. One such way is by considering their star power.

The gladiators with the biggest draw were considered the elite, the ones every editor (organizer) wanted for his game. These special entries would bring large crowds and, of course, please the multitude. They were the rock stars of their times.

Even though factor such as time period and public preferences make it difficult to put a number in any kind of gladiatorial cataloging, the Elite gladiators are usually divided into four kinds:

These were the free gladiators, former champions and crowd pleasers. At times, a gladiator could be freed after winning five fights or, regularly, performing particularly well in one clash. Their name derives from the rudis (wooden sword) they received as symbol of freedom. Most rudiari became body guards, trainers or simply retired into anonymity. But some would continue to fight in the arena, for their skills made them extremely popular and they could demand very high payment for their performances. The editors were always interested in adding rudiari to their program.

They were a kind of glorified executioner. Their opponents were Noxii – criminals or prisoners of war- condemned to death. The Noxii will fight each other, one with a sword but blindfolded and the other unarmed but with no blindfold. They wore little, if any armor. The winner would fight the Tertiarius. The result of the battle was never in doubt. The general public loved this type of conflict. The Tertiarius additionally filled in for announced gladiators who for any reason could not appear on the arena that day.

Sagittarius is Latin for archer. They were mounted bowmen that participated in mock battles or hunted wild animals. The bow use was the Parthian; short, curved and of Middle Eastern origin. The dressed in colorful loin clothes and wore pointed helmets and scaled armor. Usually well paid, the Sagittarius wok required little risk on their part. Except for the occasional wild boar, bull or bear, their prey was deer, dogs, goats and antelopes. In the mock battle the enemy was usually the inept Noxii, Generally a crowd pleasing, novelty act.

Female Gladiators. Like today’s fight promoters, the editors always looked for something original and different. The female gladiator was such an act. So far there is only evidence of heavily armed and armored women fighting each other. Interestingly enough they wore no helmets. Maybe this was done to show the crowd that they were females and to augment the prurient appeal this kind of combat obviously had. The emperors Nero and Domitian were particularly fond of women combat. Nero in particular enjoyed forcing well born and patrician women to fight in the games. Citing the singular kind of heckling female gladiators got from the crowd and the free participation of free women in the games Emperor Septimius Severus banned womanly combat in the arena in the year 200.