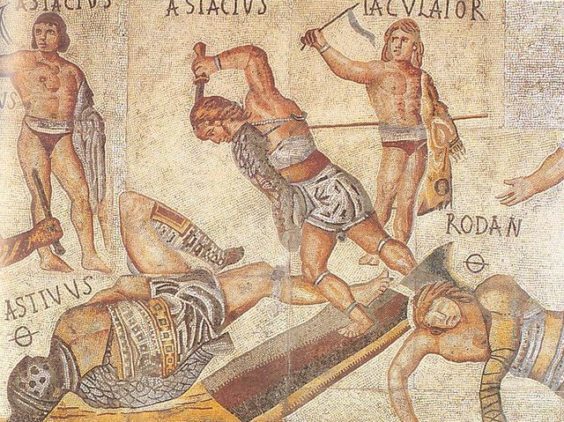 These particular fighters with very specific functions can be sorted in six groups:

They were Noxxi (see below), who fought each other wearing helmets with no aperture for the eye. They had no armor and were armed with a sword. Usually, the battle started on horseback but it ended on foot. They slashed and thrust wildly until one won. This was supposed to be a sort of comic relief and the matches were usually held in the mornings as a warm up for the real games.

The name given to the gladiator who, armed with a spear or knife and sometimes a whip, fought animals. He wore no armor. His head was protected with a helmet and his arms and legs with minor wrappings. In general a Bestiarii was anybody associated with wild animals, even a trainer or a Christian to be executed by a lion, tiger, or bear.

Dressed on a canvas loincloth that could be of any color, these gladiators fought each other at funerals. It was part of the funeral rites of important persons. Their only defense was a small shield and their weapon a glaudius (short sword).

Condemned prisoners or prisoners of war who fought in mock up sea battles. They wore the clothing and used the weapons of those they were emulating. They were expected to die in battle, either by the wounds received or drowning.

The clowns of the arena, they used wooden weapons. The Praegenarii opposed each other at the beginning of the games and during breaks in the real fighting. They wore any armor and choose any weapon they wanted. Their combats were usually accompanied by music.

They used javelins, lances and darts to fight elephants, tigers, leopards and lions on the Venationes (hunting shows). They also trained animals to do tricks.

Yet another way of classifying the gladiators was by considering their importance and function. Alphabetically they were the:

Roman citizens who became gladiators to gain the money needed to pay a debt. They signed contracts accepting iron branding, beatings and execution by sword if they \didn’t carry out their duties. They kept their Roman citizenship

They fought in groups. Kind of a gladiatorial team member.

The emperor’s boys. Their training and living expenses were paid by the personal fortune of the emperor.

So named because they fought at around Noon. They were lightly armored and sparsely armed. Usually followed the Bestiarii.

Condemned criminals. Their sentence was to die fighting in the arena.

Your run-of-the-mill gladiator who fought in pairs, like the Thracian or Murmillo or Dimacheri or Retiarii.

The Veteranus was the survivor or at least one fight.