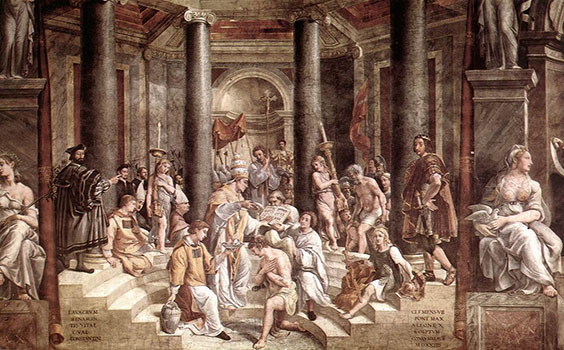 How did Constantine set in motion the Christianization of an Empire whose very foundation was built on the respect and worship of its pagan gods?

The Roman Emperor, Constantine, was the first Emperor to be a major promoter of Christianity within the Empire. Although Christianity as a religion had been around for many years, it was now finding its way into Roman everyday life on a much larger scale. Despite Constantine’s belief in Christianity, and the increase in believers within the Empire, the Romans who would be later classified as “Pagans”, still vastly outnumbered the Christians. However, due to Constantine’s position and influence, the situation inevitably changed, albeit very gradually to the point where Christianity displaced paganism altogether.

Within Constantine’s entourage was a Bishop of Christian faith. His name was Ossius, or Hosius. Constanine’s father was sympathetic to the Christian cause, no doubt his attitude influenced Constantine. This Bishop was a clever man and many believe that it was he, through Constantine, that caused the explosion of Christianity throughout the Empire. The many signs that Constantine saw, and the divine help he received in his battles could have all been interpreted by the Bishop, for his own personal gain. It is a theory, and an interesting one at that.

When Constantine first came to power, his initial laws concerning religion allow each man to worship any religion he thinks is best for himself. Within the “edict of Milan” he seems to be pursuing a society free from the discrimination that many Christians had received prior to Constantine becoming Emperor. It is interesting that he would do this considering the atrocities inflicted upon the Christians by Pagan Romans. Perhaps this was shrewd business from a man who was clever enough to realise that despite his own beliefs and power, the vast majority of his citizens were Pagan and would rebel if their traditions had been taken away from them.

The Shift In Power

After satisfying all parties with his initial laws, Constantine began to introduce new laws that did not outlaw paganism, but made Christianity a more tempting proposition. For example, Christian clergymen would be exempt from all public duties. He is bringing people into the Christian faith through benefits. Christians also paid less in tax and gained privileges not available to pagans. Eventually, as more and more citizens swtiched religions, Constantine could introduce more laws with harsher penalties for pagans. Constantine also eventualy referred to Christianity as the state religion, which shows just how far the pendulum had swung during his reign.

The word “heretics” also starts to make an appearance, as Christianity became more popular, to describe pagans. Constantine had used his clever words and laws to “persuade” pagans to become Christians, thus causing a shift, albeit a slow one, in the balance of power. Through his techniques, Constantine managed to completely change the face of Rome and its thousands of years of tradition. It would take many more years for Christianity to completely take over, but the wheels of change were definately set in motion.