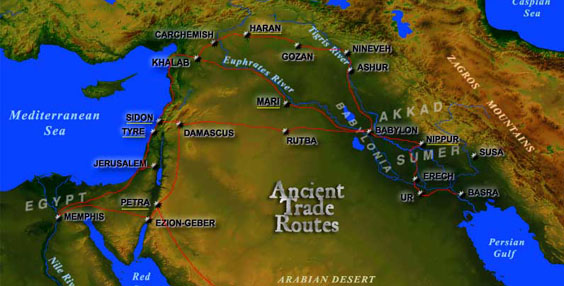 Trade and commerce increased as ancient civilizations achieved a dominant, imperial status within the Near East and developed common standards of exchange.

The emergence of regular trade practices in the Ancient Near East can be traced to the first civilizations that formed early communities, eventually becoming the city-states of Mesopotamia. The same can be said of Egypt during the first Dynasties of the Old Kingdom. Over many centuries, the expansion of trade in the Near East affected the economic prosperity of civilizations while promoting an early form of multiculturalism based on an exchange of ideas and innovations.

Even before Sargon created the first empire, Mesopotamian city-states were engaged in trade with each other and with foreign civilizations such as the Indus Valley communities. Ancient texts frequently mention the semi-precious stone lapis lazuli which came from modern-day Afghanistan.

Early Mesopotamians traded their grains, wool, and textiles for gold, stone for building, spices, and wood. Mesopotamia was an arid, barren region with few natural resources. Hence, most of the foreign trade in other goods was state-controlled by the kings whose “creditors” were a pseudo-merchant class accountable for their import and export expenditures.

Early Mesopotamian trade, according to some scholars, might have played a role in the gradual shift from a barter economy to one that used commodities such as silver or grain in payment. After the Sargon period, Mesopotamia developed a uniform standard of weights and measurements, further attesting to a more sophisticated system of import and export norms.

During the time of Sargon and up to later Assyrian dominance, Mesopotamia traded grain, wool, and textiles for honey, raisins, resins, spices, and bitumen used for ship-building. Evidence of extensive trade has been documented through archaeological finds of thousands of stone tablets that recorded exports and imports by Mesopotamian scribes.

Assyrians and Near East Trade

Historians have pointed out that as Assyrian cities, like Nineveh, grew, the local regions around these cities could no longer sustain urban populations through agriculture. This necessitated either trade for grain and other food stuffs or conquest involving tribute. In terms of trade, Assyrians facilitated a broad export enterprise, often through client or subjugated states. Assyrian also developed an early silk industry.

Assyrian trade with Egypt and Syria has been called “lively” by scholars of the ancient world. Long-distance trade flourished, usually as a monopoly of the king. By this time, gold was replacing silver and copper as a medium of payment.

Egyptian Trade in the Ancient World

Ancient Egypt developed trade relationships with numerous neighbors throughout its long history. As early as the Old Kingdom, goods from the Near East were brought to Egypt as well as foreign workers and artisans. In time, Egypt traded with the Minoans, the Trojans, the early Greeks, the Arabs, Nubians, and Canaanites.

Under the Hyksos, during the Second Intermediate Period, Egypt traded with the Nubians, importing such items as oils, furniture, and weaponry. Biblical scholars suggest that it was during this time that Joseph entered Egypt with a trade caravan crossing the Sinai. Years later, his brothers entered Egypt to purchase grain.

Trade increased during the New Kingdom, particularly after Egypt and the Hittite Empire concluded one of several peace agreements. Trade functions best in the absence of war. Egypt imported incense from Canaan as well as opium from Cyprus. Other commodities include figs, grapes, wine, and beer.

Trade Patterns in the Ancient Near East

Trade and commerce greatly contributed to the rise and economic prosperity of ancient civilizations. Each successive civilization expanded trade. Trade led to uniform weights and measurements and the evidence of such standards, such as in Canaan during Egypt’s New Kingdom, suggests that the Levant played a major role in facilitating regional trade patterns.

Evidence of mature trade and commerce also points to sophisticated cultures that understood the nature and value of commercial cooperation. Another conclusion that can be drawn is that civilizations at their zenith militarily, like the Assyrians, Hittites, and Egyptians, evidenced the most vibrant and diverse trade relationships during their periods of hegemony.

The Rise Of Abdi-Ashirta Of Amurru

The Origins of Sargon the Great

The Cursing Of Akkad

The Conquests of Sargon the Great