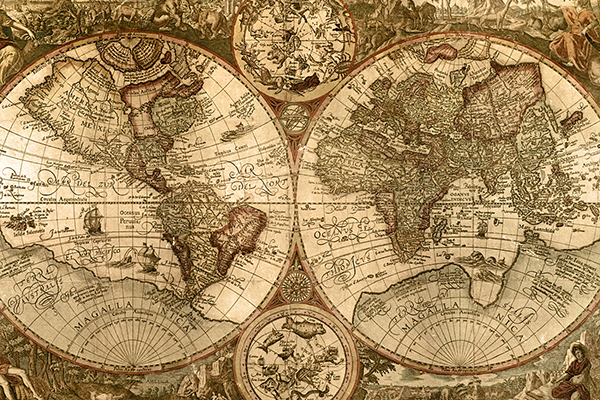 One of the earliest forms of non-verbal communication is mapping. One must credit the early explorers and map makers for the majority of man’s discoveries.

Maps are a vast window into ancient history even before there were written words. They tell us much more than just how to get from point A to B. The word cartography is from the Greek words, charts and graphein, which simply means to write. Many of the earliest maps discovered are of the heavens, not the earth.

Mapping is the earliest form of non-verbal communication. Every single culture in every part of the world uses and makes maps. They have been found on literally every form known to mankind. They have been found on paper, stone, metal, wood, skin, horn and cloth. Yet is wasn’t until the invention of the printing press in the middle of the 15th century that paper became the norm.

A map drawn and discovered on the walls of the Lascaux Caves has been dated back to 16500 B.C. The Lascaux Cave can be found in the southwest of France. Another early known map is a nine foot long wall painting of an ancient Turkish city of Catal Huyuk dating to the 7th millennium B.C. It was discovered in 1963 by anthropoligist James Mellaart. Carbon dating has it back to 6000 B.C. This map is unique because it shows urban settlers with an erupting volcano, the oldest documentation of such an event.

Map making in America was regarded as primarily a task of the arm and navy. Civil maps rarely went beyond city plans. The first map to be drawn, engraved, printed and published in America seems to be the one of New England by John Foster, the first Boston printer in 1677. Much of the vast discoveries of the Americas was done by explorers. They discovered and drew maps of the interior of America and the rivers and lakes within.

The very first professional cartographer in America was Osgood Carleton (1742-1816). He was a Boston mathematician. In the summer of 2006, a map was appraised at the Antiques Road Show in Tuscon, Arizona. The appraiser, Christopher Lane, at that time appraised it around $6,000.00. The owners asked him to do some further research on the map and in doing so Mr. Lane found that it was an unrecorded map which made it one of a kind. Restored, he valued it at $36,000.00 and was sold almost immediately.

It has been said that it is the ‘greatest find of modern age.’ The map was kept for over 350 years in the castle of Prince Johannes Waldburg-Wolfegg in that is today southern Germany. It was discovered in the castle in 1901. Finally, in 1992, it was offered for sale and the Library of Congress purchased it.

Old map makers used a combination of charts from explorers coupled with logic to map out what they thought it should be. Some of them turned out to be quite accurate. There have been times when thoughtless crimes have descreated historical collection of maps and books. Maps have been cut out from numerous collections. A noted rare maps dealer, Edward Forbes Smiley III admitted he stole and sold many rare maps worldwide. In September 2006 he was sentenced to 42 months in prison and ordered to repay some two million in restitution.

One of the rare maps stoled by Smiley has been returned to Yale University. It was a rare 1524 woodcut map by explorers Herman Cortes depicting the Aztec island city of Tenochtitlan and worth about $150,000.00. An unsuspecting art dealer who had purchased it from Smiley came forward and returned this valuable antique map.

A rare 396 year old map of Canada by French explorer Samuel de Champlain was to be auctioned off in Britain by Sotheby’s. It is listed as one of the most important maps of Canadian history. It was the first map to show Montreal, Lake Champlain and the Great Lakes.

A few decades ago gas stations used to hand out road maps as a courtesy. Because of the advent of computers and GPS’s, it is possible that paper maps are becoming obsolete. Today we can get instant maps on our cell phones, GPS’s and computers. The mapping of the world as we know it today can be found in antique maps giving us many clues from yesterday.

Because they are so fragile and must be preserved with special care, antique maps are becoming harder to find and more valuable.

A degree in geography and/or cartography is a growing field. The GIS system captures, maps, stores, analyzes, navigates, and presents unlimited maps. Many accredited colleges offer degrees for this career choice. Internships are also available for one to learn these skills. But for those of us who simply want a map in the blink of an eye, all we have to do is Google a place and instantly it is on our screen.