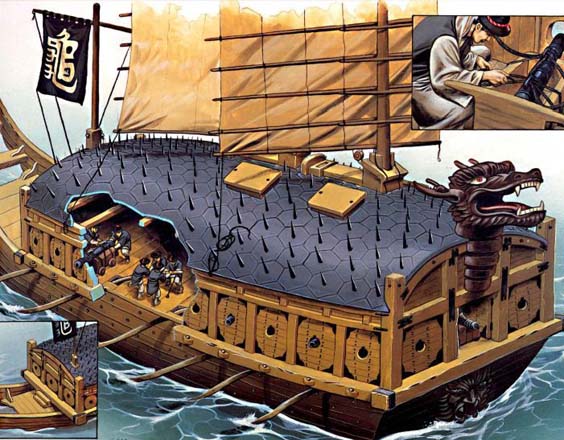 Archaic vessels give a strong impression of the skill of Cypriote boat builders for a variety of purposes – fishing, coastal transport and transporting cargo.

Although no real ships of this early period remain, much can be learnt about early shipbuilding methods by examining clay models found in tombs, designs on pottery vases and graffiti on temple walls. Many clay models display singularly or in combination such features as the poop-deck, tumble home, scuppers, mast and oars and even a projected keel or ram.

The conventional way of shipbuilding was to construct the shell or hull first instead of the skeleton, a much later method. The Uluburun and Kyrenia wrecks were built in this way. First the keel or backbone of the ship was laid down and then planks of wood (strakes) were joined together rather like a brick layer building a wall. Each plank had a projection at one end which fitted into a corresponding cavity in another piece (mortise and tenon) and fastened with fibre ropes.

The shell-like hull of the ship was then reinforced with wooden cross beams and made watertight from the inside with fibre. Frames to strengthen the hull were usually added later or even postponed until the hull began to show signs of weakening.

As a rule boats were equipped with two cross planks (thwarts) which served a double purpose to keep the hull together, making the vessel more seaworthy, and as seats for the oarsmen. These often appear on the models as small decks on the bow and stem. Some ships had half decks as a place for the helmsman and to shelter the cargo and some had poop-decks constructed as an extra deck on the stern.

The International Symposium Cyprus and the Sea ( 1993) refers to a clay model from Amathus of a large sailing ship – now in the BritishMuseum. The hull is typically deep and rounded with a second deck supported by 2 pillars and a poop-deck flanked by bulky towers to house the steering oars. A cross beam surrounds the mast socket in the middle. The poop-deck takes up one third of the space (for navigation and quarters), with the remaining space being for cargo.

Merchant ships as well as men-of-war of Cypro-Archaic times had a prolonged keel or ram, which was originally simply a construction detail and not intended to inflict damage. Another model from Amathus, in the Metropolitan Museum, New York, shows a rounded hull with an instantly recognizable keel. Two parallel strakes just below the gunwale are also visible, probably to protect the hull when coming alongside.

Clay models also reveal other interesting construction details which show that the Cypriots employed advanced ideas such as “tumble-home” where the sides of the ship slopes slightly inward above the greatest breath and “scuppers” or openings in the hull to carry off deck water or to facilitate the oars.

Models depict mast sockets amidships and rows of holes along the gunwale for fastening the lines for supporting the mast (stays) or for rowing. Cypriote Ships from The Bronze Age to C. 500BC (Karin Westerberg) says that some models have as many as 75 holes in the gunwale, others have 18 on each side. A “penteconter” had 50 oarsmen – 25 on each side. It was 30m long and a 10m mast. Cargos of 450 tons were not unusual.

Paintings of ships on vases all show ships with masts. For example, a vase from CyprusMuseum is decorated with a slim vessel having two stems curving upwards – one crowned by a bird’s head and the other by a small ram. A mast in the middle supports a long yard. Two loose stays run from the yard to the gunwale. A loose rope holds the anchor. Two steering oars are depicted astern.

Graffiti or wall drawings such as on the temple walls at Kition, Graffiti found in Enkomi on the east coast actually portrays a ship with a swelling sail in a fair wind.