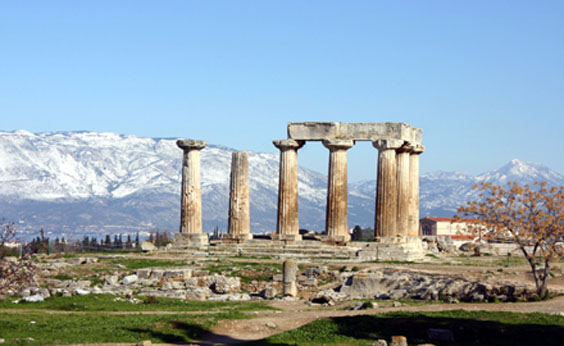 Examining the history of Corinth through ups and downs, wars and successes, from the Neolithic to the late Roman period.

Corinth is an ancient city with a long and varied history; it has experienced periods of great wealth and power, and periods of decline and even destruction. At several points in its history, it was one of the foremost cities in Greece. Yet studies on the city are far less common than those on Athens or Sparta, the reasons for which I intend to explore on another occasion. However, in an attempt to do something to fill that gap, and in preparation for future articles discussing the excavations at Corinth, the focus on Athens in classical Greek studies, and other topics which relate to Corinth, I first wish to establish a brief history of the city from the Neolithic until the late Roman period.

The Neolithic and Bronze Age

The site of ancient Corinth was probably first occupied around 6500BC, thanks to the presence of good water sources and fertile land (Lavezzi 2003, 63). Over time the site’s suitability as a trading hub – with access to good harbours in both the Gulf of Corinth and the Saronic Gulf, as well as controlling land routes into and out of the Peloponnese – made it fairly wealthy; the region was a significant hub of trade by the start of the Early Helladic period – 2800-2100BC (Blegen 1920, 8).

However, there is a dramatic reduction in ceramic remains during the Early Helladic II phase (2500-2300BC), and there are only minimal remains dating to the EHIII and MH phases (Lavezzi 2003, 73-74) – the settlement lost its importance, wealth and population fairly rapidly, though it is unclear why.

The Geometric and Archaic Periods

During the early geometric period – around 900BC – it is thought that the Dorians settled at Corinth as well as at Sparta and other sites in the Peloponnese (Dunbabin 1948, 62-63). In around 750BC, two key changes in the archaeology at Corinth mark a turning point: first, there was a decline in the number of grave goods, and for two centuries afterward grave goods continued to be rare (Osborne 1996, 83); secondly, there is an increase in the quality of locally produced ceramics as the Protocorinthian style of pottery decoration is developed (Dunbabin 1948, 65.) Also around this time, the Corinthian colonies of Syracuse, on Sicily, and Corcyra, modern-day Corfu in northwest Greece, were founded (Dunbabin 1948, 65), enabling the city to extend its trade networks and its influence.

Each city of Greece had distinctive traits used in its geometric pottery. For example, Argive decoration tended in favour of horses, with also men, birds and fish represented. Corinthian geometric pottery predominantly featured small birds during the 8th century, though as the Protocorinthian style developed, potter experimented with including warriors and animals too (Osborne 1996, 130-131). From the Protocorinthian style, mixed with influences from Phoenicia which reached Corinth through the city’s extensive trade networks, the Corinthian style developed, featuring stylised depictions of animals and monsters (Osborne 1996, 168). During the seventh century, these wares were widely traded across Greece and beyond (Osborne 1996, 247), making Corinth the largest exporter of fine ceramics at this time, and making the city wealthy.

In the late archaic period, however, Corinth’s economic importance waned as exports of Corinthian wares reduced and Athenian blackfigure began to dominate the market (Osborne 1996, 247); it is possible that this may have been simply because the Athenian port at Piraeus was closer for traders from the Aegean and the Near East (ASCSA 1954, 13).

For much of the eighth and the early seventh century BC, Corinth was ruled by an oligarchic family, the Bacchiadae, who were banished in the seventh century by Cypselus, who became tyrant. He was succeeded by his son Periander. After Periander’s death in 585BC, and the new establishment of an oligarchic government, the citizens of Corinth celebrated by building the Temple of Apollo (Hornblower 2002, 114), the remains of which are still visible today.

The Classical and Hellenistic Periods

Written evidence discussing Corinth in the classical and Hellenistic periods is severely limited. Being an oligarchy, rather than a democracy as Athens was, Corinth’s magistrates had no duty to be accountable to the citizens about posting public notices about laws, decisions and treasury spending; and in any case whatever such notices that once existed would have been destroyed when the city was sacked by the Romans, with their characteristic efficiency, in 146BC (Hornblower 2002, 111). It is thought that Aristotle wrote a work entitled Constitution of the Corinthians, but it has not survived (Hornblower 2002, 111). Nevertheless, archaeology and other ancient sources such as Herodotus and Thucydides provide valuable information about the external politics of Corinth, if not the interior politics.

In the second Persian War (480-479BC), Corinth was still wealthy enough to contribute 40 ships to the defence of Greece (Hornblower 2002, 115), though in addition to this, a wall was build near Corinth crossing the narrow isthmus to protect the Peloponnese from the Persians should the other measures fail (Hornblower 2002, 112).

In the Peloponnesian War in the late fifth century BC, Corinth sided with Sparta, and indeed encouraged the Spartans to go to war with Athens. But by the end of the war, with trade and the fishing industry both hampered by Athenian naval blockades, Corinth’s fortunes had declined dramatically, and though on the winning side, the city was one of the worst hit by the war (Hornblower 2002, 115).

In the 390s, Corinth merged with long-time rival Argos, creating a single state governed by democracy, in opposition to Sparta (Hornblower 2002, 115). At about the same time, Corinth and Argos were joined by Boeotia and Athens in their opposition of Spartan expansion (Hornblower 2002, 210).

During the Hellenistic period, Corinth was never quite a major power, but due to its position, both militarily and economically strong, was frequently contested in conflicts between the leading powers at the time. In 308BC, Ptolemy I, a successor of Alexander the Great, captured the city from Antigonus, another of Alexander’s successors; but Demetrios, Antigonus I’s son, recaptured Corinth four years later (Shipley 2000, 121-122). In the 240s BC, Corinth was again contested, this time between the Antigonids, who controlled most of Greece, and the growing Achaean League. Corinth was first captured by the Achaean League forces in 249BC, but Antigonus II Gonatos recaptured the city in about 244BC before the Achaean general Aratos brought Corinth permanently into the Achaean League in 243BC (Shipley 2000, 127, 137-138).

Initially, when Greece first came into contact with Rome, the Italian city was treated in a similar way to the other major Hellenistic powers, and indeed Rome’s assistance in 197BC was welcomed by the Achaean League in their conflicts with the Antigonids. However, the Achaean League soon discovered, too late, that Roman interference would be far more intrusive than that of the Antigonids (Goodman 1997, 229). Within half a century, Rome had a huge amount of influence, if not direct control, over western Greece, but it was not popular. In Corinth, craftsmen and labourers protested against Roman envoys.

Rome decided to annex the territory and bring Greece into Roman jurisdiction. After repeatedly defeating the forces of the Achaean League, Roman forces reached Corinth in early autumn, 146BC. The city surrendered, but it didn’t save them; city was razed and its citizens murdered or sold (Shipley 2000, 384-385).

After 146BC, Corinth was sparsely populated; evidence of ‘miserable huts’ thought to be occupied by squatters, were in fact nothing of the sort, with some of the archaeology interpreted as being part of this having no greater accuracy of date than “after the late fifth or early fourth century BC”, while other sections of the archaeology date to after the Roman colony had been founded (Millis 2006, 404).

The city was refounded in 44BC, by Julius Caesar, as a Roman veteran colony rather than on the previous classical Greek model, possibly as part of measures to stimulate the failing Greek economy (Goodman 1997, 231). As had been throughout the city’s history, Corinth’s wealth depended on its position as a centre of trade, particularly between east and west (Walbank 2002, 259).

In the first century AD, Corinth played host to a number of Roman emperors and future-emperors, including Nero and Vespasian in AD66, and later Vespasian’s son Titus in 69, when he learned of the death of Galba (Walbank 2002, 259). As such, Corinth’s strategic and economic value was known to those in power. Though Vespasian revoked Corinth’s right to mint coinage, as part of a reorganisation of imperial finances, this right was returned to the city by Domitian, and thereafter Corinth was the foremost mint in the province (Walbank 2002, 259).

An extensive programme of building in the late first century AD may have been in reaction to an earthquake in the 70s. The programme included construction of a new odeum, the colonnade on the Lechaeum Road, and the refurbishment of the ancient Peirene fountain on the Akrocorinth (Walbank 2002, 260).

Corinth fared less well in the later Roman period. The city had barely recovered from an earthquake in AD375 when, about two decades later, it was attacked by the Goths under Alaric and many inhabitants were sold into slavery (ASCSA 1984, 13). Later, in the 6th century, first an earthquake and then, some twenty years later, a plague, saw the city’s population and fortunes decline sharply. While settlement continued on the site, Corinth did not regain prosperity again until the 12th century, under Byzantine rule (Sanders 2003, 395-396).

Corinth’s history is one of cycles between prosperity and poverty; its wealth came from trade; its downfalls, where we know the reasons of them, from wars and natural disasters. Its remarkable history even made Corinth a candidate for the new Greek capital after the Greek War of Independence in the 1830s (ASCSA 1954, 15). Further excavations and future studies are sure to reveal more of its fascinating history.