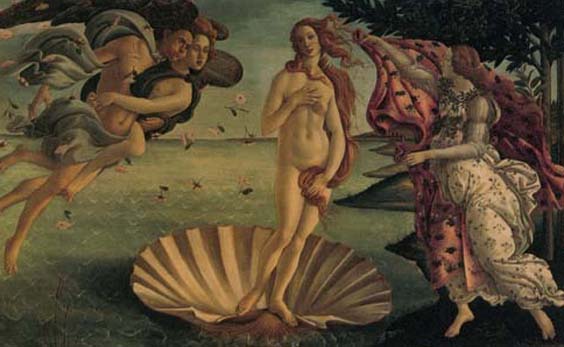 Aphrodite was worshiped in Ancient Greece as the goddess of beauty, love, sexuality, pleasure and the protector of sailors.

She was always portrayed as a beautiful, well shaped, golden haired, eternally young, infinitely desirable, woman. Maybe because of all the adulation she received, Aphrodite is often characterized as vain, irascible and moody.

Her symbols are the scepter and dove. She is said to have ridden the waves in a giant abalone shell. The rose, daisy and iris are her flowers. The olive, myrtle, cinnamon and marjoram are also associated with her.

Birth and Origin of Her Name

The birth of Aphrodite is open to question. According to Homer, she was the daughter of Zeus and Dione, a female Titan. But a second, more popular myth, advanced by the poet Heriod, assures us that she was born when Cronus castrated Uranus and threw his genitals into the sea, somehow engendering the goddess who then rose as an adult from the aphros (sea foam) in a shell of the coast of Cyprus. This story suggests that Aphrodite (Risen from the Foam) was older than all the other gods of Olympus, including Zeus. Later legends got around the issue by explaining that it took a long time for the goddess to reach maturity and that she did not come out of her shell, so to speak, until after Zeus was fully enthroned and in command of the Greek pantheon.

Once in dry land, Horae, daughter of the goddess of law Temis, dressed and bejeweled Aphrodite, and took her to Olympus.

When they reached their destination Aphrodite presence set off one of the biggest ruckus ever to hit Olympus.

Every god wanted to marry her. In order to keep the peace, Zeus gave her to the lame Hephaestus, the even tempered god of volcanoes and smiths. Of course, ugly Hephaestus wasn’t good enough for her. She fell in love with Ares, the god of war and had an ongoing affair with him.

Aphrodite and Ares had five or eight off-springs., the best known being: Deimos, god of terror; Phobos, god of fear; Eros, god of physical love; Harmonia, goddess of harmony; and Adrestia, Ares’ companion and attendant.

She also had affairs with numerous mortals, including the handsome youth Adonis and the shepherd-prince Ankhises.

Aphrodite was very much involved in the Trojan War. She was somewhat responsible for causing she granted Trojan prince Paris the love of the most beautiful woman on earth, Helen. But Helen was married to Menelaus, king of Sparta, and when she eloped with Paris, only the destruction of Troy could satisfy Greek honor.

She actively participated in the war, supporting Paris and young Aeneas, her son by Ankhises. Aphrodite was wounded in the fighting.

The main centers of worship to Aphrodite were in the city-state of Corinth, as well as the islands of Cyprus and Cythera.

In Classical Greece she was frequently liken to similar foreign deities such as the Arabian Alitat, the Egyptian Hathor, the Phoenician Astarte and the Assyrian Mylitta. The Roman version of Aphrodite is Venus.