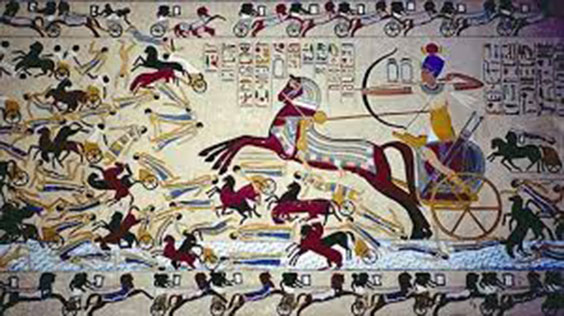 The Nile River ensured Egyptian prosperity yet isolated the civilization from outside invasion as did other natural barriers until the invasion of the Hyksos.

Egypt was always protected by geography. The Nile River, flowing down to the Mediterranean from sub-tropical Africa, was impassible beyond Khartoum in the Sudan where the Blue Nile and the White Nile converge. Cataracts prohibited invasion from the Sudan and there were few civilizations strong enough to mount such an enterprise. At the Nile Delta, the Mediterranean offered security from invasion, at least until the Sea Peoples came much later during the New Kingdom.

To the west, Egypt was secured by the Libyan Desert while the Red Sea stifled invasion from the east. During the end of the Second Intermediate Period (ca. 1700 B.C.E.), however, the first full scale invasion of Egypt occurred over the Sinai.

Egypt Before the Hyksos Invasion

Egyptian civilization dated to the Early Dynastic Period, ca. 3100 B.C.E. Even before this period, communities were established along the Nile delta in the many wadis or dry river beds, one time tributaries of Africa’s longest river. Egypt flourished as the “gift of the Nile,” establishing a complex society. This was the period that saw Upper and Lower Egypt unified and the time of intense pyramid building. This “Old Kingdom” devolved into political instability causing the formation of a new dynasty born out of the turmoil, and the start of the “Middle Kingdom.” (ca. 2050 B.C.E.)

The Middle Kingdom saw increased trade and growing prosperity. Public building projects connected the Nile with a canal to the Red Sea. The great temples at Karnak were constructed as the chief god of the new capital at Thebes, Amon, showered the land with prosperity.

The Middle Kingdom dissolved into political and social instability, ushering in the Second Intermediate Period. This time coincided with an extended period of famine, felt most keenly in neighboring areas such a Mesopotamia. Word spread through the caravan routes that grain existed in Egypt. Historians speculate that this may have been a motive for the Hyksos invasion.

Crossing the Sinai, the Hyksos engaged the Egyptians militarily. Centruries of peace, due in large measure to geographical obstacles, had left Egypt unprepared. The early ancient military revolution had not made its way to Egypt. Egyptians faced invaders on chariots, wielding metal weapons of far better caliber than simple Egyptian spears. The Hyksos’ combination bow was more accurate and deadly. Egypt was swiftly conquered.

Old Testament historians maintain that the Hyksos foray into Egypt was accompanied by many other groups seeking relief from the famine, perhaps even the nation of Israel whose long term presence in Egypt would end with the legendary Exodus under Moses decades later. Other than the Old Testament, however, there is no corroboration for either the Exodus or Moses.

Egypt Recovers and Launches the Imperial Age After Expelling the Hyksos

Around 1575 B.C.E., the god Amon delivered Egypt. A sense of nationalism enabled Egyptians, who had learned well from their invaders, to expel the Hyksos and move beyond the Sinai, beginning an Imperial Age that only began to wan after the death of Ramses II. The Egyptian Empire included all of modern day Palestine up to the southern mountains of Turkey where it collided with the Hittites.

While Egyptian geography isolated the civilization for so many centuries, that same isolation kept Egypt from developing competing strategies of warfare and weaponry, ultimately leading to invasion. At the same time, Egypt was prosperous and peaceful with no need to venture beyond its borders excepting trade considerations. The Hyksos invasion changed those patterns.