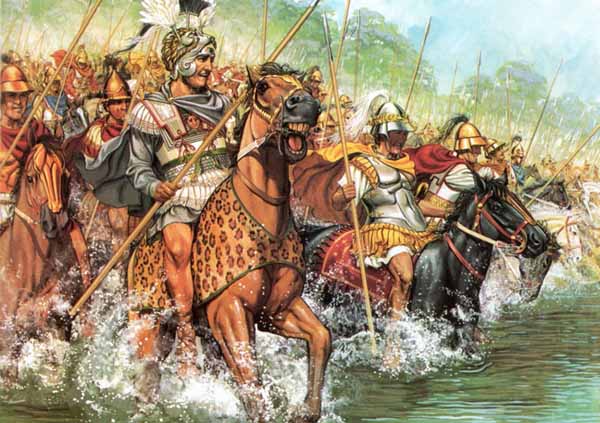 In 334 BC at the Hyphasis river, Alexander gave up his India ambition. His army refused to go further. Subsequently, Alexander agreed to return to Persia.

Alexander’s troops refused to support him with his continued India campaign and goal of crossing the river Ganges. His troops marched and fought with him for 12,500 miles, over eight years, from Troy to Hyphasis and they were completely worn out. After great deliberation, Alexander agreed to discontinue his India campaign and return homeward.

The trip down the Indus was very challenging with destructive rapids and warring natives which Alexander fought. The Malli tribe, whose land was between the Akesines and Hesidrus, forced Alexander into ferocious battles.

The territory of the Malli was along the Hydraotes river. Subsequently, the Malli expected Alexander to attack from the Hydraotes. Alexander advanced with part of his army through the desert and into the Malli land. He then drove them down the Hydraotes into the column of Hephaestion who was at the lower part of the river. Additionally, Craeterus with his fleet and elephants was located on the bank of the Acesines opposite the mouth of the Hydraotes. This position of Craeterus’s was intended to prevent the escape of the Malli tribe.

This surprise strategy by Alexander was successful and prevented the Malli and Oxydracae armies from joining forces against Alexander. However, the Malli tribe nearly killed Alexander at their main town when Alexander, leading his troops as an exalmple, climed the castle wall and jumped down alone into the interior of the castle. He was struck by an arrow which punctured his lung. Alexander was rescued by his men and carried away on his shield. Most of his army thought he was dead.

It was not the capture of the town by his troops that scared the Mallis, but the unheard action by Alexander of jumping into the enemy’s castle that sent terror to both the Mallis and the Oxydracae tribes. Both tribes immediately surrendered to Alexander.

Accordingly, Ulrich Wilcken in his book Alexander the Great, points out the boldness of Alexander’s example was responsible for the submission of these two tribes. Wilcken was referring to Alexander’s jumping over the Malli’s wall and into their castle grounds. All of the brillant strategy Alexander had executed against this enemy was only secondary in importance, compared to the breeching of the Malli castle wall.

In 325, Alexander made camp in Pattala, capital of the Indus delta region. Here he made preparations for his return to Persia. Craterus was ordered to lead a column of troops and elephants to Carmania. Alexander led the other units to meet Craterus at an agreed rendezvous and then made their return to Persia.

Alexander was forced to give up his India ambitions of total domination of that country because his army was exhausted after eight years of non-stop battle and hardship, which covered 12,500 miles. This man’s appetite for battle, glory, and domination was insatiable. No hardship or challenge seemed to deter his resolve and ambition.