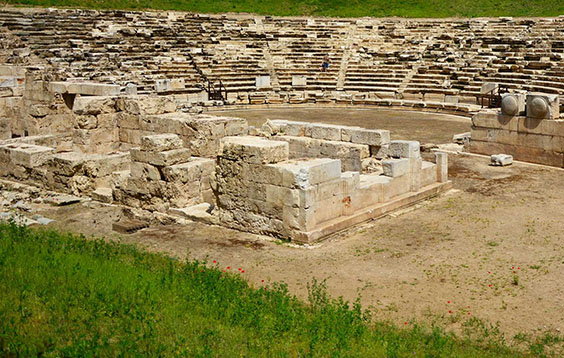 To the south of Macedon are the green plains of horse breeding Thessaly. It was one of the first stopping places in the coming of The Greeks and kept an old oligarchic life style where aristocratic land barons held huge tracts of land and raised the war horses which even The Great Kings Of Persia coveted. Thessaly was a rich land, rough around the edges, and not unlike the vision which Edna Ferber gives us in, “ Giant “. Perhaps the arts are lacking, but the life here was a good one for rich and poor alike.

To be a land baron with a great horse ranch in the 4th century in Thessaly would not be bad at all. After all, if you wanted a Corinthian flute girl or a Phidian statue, import one, you could afford it. When the Thessalian horse breeder, Philoneicus, sold Bucephalas to Philip II, he got 13 talents and the animal was unbroken. That was one horse and thirteen talents would make anyone in Hellas very rich. Philoneicus had many more. I think I would like to live in a ranch in Thessaly with plenty of land and horses and a big house.

‘My house? why it’s just there; you can see it from here on top of that hill on the other side of the valley, the low building on the horizon. Ride with me; I’ll show it to you. This road goes right to my door.’

‘The chained slaves working these fields are from King Alexander’s foreign wars. They’re Hellenes, poor fellows. They were only trying to make a living as best they could fighting for Persian gold. I would have no field slaves at all were it not for the fact that all the free young men around here have gone off to fight for Alexander somewhere at the ends of the earth. Slaves don’t pay, you see. It’s no more than simple economics. Tenants and seasonal laborers, that’s what you want. They’re a whole lot cheaper. Just look at the bottom line at the end of the year.’

‘I can’t complain though. What with the prices of good Thessalian cavalry horses now a days and the market being the way it is. Why, I can sell as many as I can get to market. It’s Cassander’s agents, may the Gods bless them, They will buy anything and pay anything you ask.’

‘Are you getting tired? We’ve been riding all morning and the house doesn’t seem any closer does it? It will soon. See that grove of willows by the stream? There are some Thessalian huts there in the shade. We’ll stop and water the horses. The people will offer us wine. Be certain to accept some; it’s a point of honor with them. Take it with lots of water. They can’t afford much wine.’

‘See, after our rest stop, the house seems much closer. We’re nearly there now. You can see the old stone walls quite clearly from here. I don’t know how old they are; my family has lived here since the time before memory. Those
bronze gates were put up after The Persians left. They were useful in the time of the troubles with Jason of Pharæ. That was long ago; they haven’t been closed since.’

‘Just inside the doors here, is the great courtyard. It’s more like a busy village square. Over there is the blacksmith at his forge and next to him the potters are hard at work making new storage jars. Just there the leather workers are busy at their trade and the weavers and fullers are close to them. The house is self sufficient. There is no real need to import anything.’

‘The granaries over there hold an extra years supply in case of trouble and it’s all grown here as is all our food. Our groves of olives keep the presses busy and the vineyards on the hill produce a very good wine. What with the orchards and the vegetable gardens, the cattle and the sheep, the pigs and the fowl, we want for nothing. We live like the nobles of Homer’s tales, but try to avoid the man killing wars. The dancing floors of Ares are far from this place.’

‘Up the stairs at the end of the courtyard and through those columns is the house proper. We enter directly into the great hall in the old style. The floors are in black and white pebble patterns and were done by artisans brought all the way from Pella. The wall paintings were done by an artist from Athens and represent the breaking of the stallions. All are life size and depict some of my own horses and men. I like it best in the winter with a roaring fire in the central hearth when the light flickering over the surface of the walls makes them seem to move.’

‘All the columns down the long sides of the hall came in sections, called drums. They were brought from Mount Pentalos in Attica through the pass at Thermopylæ on long mule trains. Isn’t it wonderful how they are joined? Each looks to be carved from one stone.’

‘The great hall is only used for feasts and public gatherings. Through that door to the left there is a small ante room and andron where I usually dine, though, at this time of the year, I use the dining room on the roof; it’s much cooler. We can dine there this evening if you like. There is a beautiful view of the valley and there are few insects so high up. I’ll order it at once. Just through here to the right are the kitchens , latrines, and slave quarters. Now make a lot of noise as we go so the slaves can hear us coming; I don’t want to just pop up and scare them to death.’

‘There now, that’s all taken care of. We dine just before sundown when it is coolest. There is a room prepared for you and I shall send my own body slave, Apollodorus, to bathe and dress you. He is my half brother and was given to me on my 10th birthday. I have offered to free him a thousand times, but he won’t hear of it. I’ve stopped trying; he always gets his way. Until later then. Rest well.’

‘Ah! Good evening. How nice you look in that pale blue chiton. My dyers here do a good job. You must keep it as a guest gift. it suits you. Have a seat, The dinner is ready. I thought you might like to taste our wine from the hillside vineyards. We’ll drink it without water; it is the custom in Thessaly.The lamb was slaughtered when we arrived. The ducks, I think, are quite good. I like the way they roast them on spits with onions and rosemary. We must eat the barley. In our culture it is the real dinner; everything else is only supposed to be an accompniment. It’s very tasty the way they stew it with the lamb and vegetables. There are lovely cakes made with nuts and honey for after dinner. The nuts and the honey, like everything, come from here. The boy slave sitting on the floor next to your couch is for you to wipe you fingers in his hair. Enjoy.’

‘I told you the view was extraordinary. from here you can see the entire valley. It looks so green in the evening light. It is, you see, Hellas. To me this is Hellas, not the shinning white columns of the great temples; they are only decorations on the surface of Hellas . It is this earth, these people, who are Hellas. The old woman tending the fire, the sleepy children sitting by the hearth, they are Hellas. Hellas is here, now. You can touch it and feel it and smell it. I am Hellas and you are Hellas. We are all one with this holy place where my fathers are buried and their fathers and their fathers before them.We eat of this land and, in the end, it eats of us. It is the reality of Hellas. It is not in the marvelous cities. It is neither in the thought nor in the arts, it is in the good earth and the people. Hellas is eternal and I would not give an inch of it for all the palaces in Persia. Let foolish Alexander plunder all of Asia, What good is it to him if he loses Hellas, his home, his roots, his very body which is of this soil. Great kings come and go, some are remembered and some forgotten. What do they mean to us. I care not who rules in Babylon. It is eternal Hellas which shall abide and I, sleeping in its soil, shall always be a Hellene. For me, that is enough.’