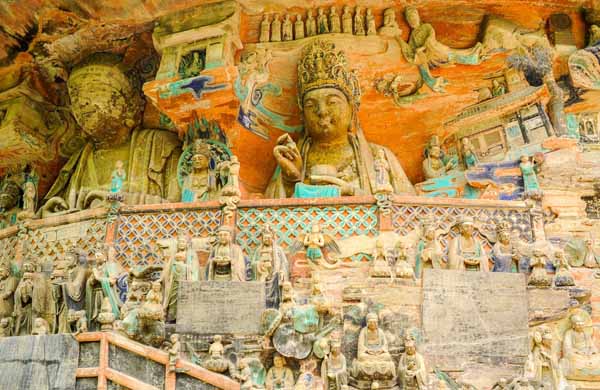 China is one of the oldest civilizations in the world. Its history is almost 5,000 years old. The Chinese civilization began in a major river valley called the Yellow River Valley. From there, the ancient history of China provides how Chinese civilization rise and fall into the hands of other dynasties and emperors.

It also provides myths and legends that shaped China. Such myths include three cultures heroes who invented writing, hunting and so forth. Also, such legends include kings who ruled the kingdom with virtue and wisdom. To trace back its history, one must first look from the prehistoric times to the Zhou Dynasty.

The Paleolithic Age in the Chinese history is approximately from 300,000-10,000 years old. This Age is the Old Stone Age. During the early period of the Paleolithic Age, humans were hunter-gathers. They developed natural stone tools to hunt and scavenge wild animals for food. They also learned how to use fires to warm or cook food.

As hominids became more like humans during the late Paleolithic Age, they developed techniques to gather food. This led to the Neolithic Age. The Neolithic Age (New Stone Age) in the Chinese history is approximately from 6000-2100 B.C. During this period, humans no longer live in caves. They began to build houses to live in, and separate themselves from different clans who had the same kin and ancestors.

Humans also no longer collected food from nature. Humans farmed lands, raised livestock, and planted seeds for vegetables. They also cultivated rice, grains, and millet. In addition, humans developed more advanced tools and handicrafts than in the Paleolithic Age. The tools were made to cut meat and other food. Handicrafts were made in various shapes, sizes, and colors.

Yu the Great, who founded the Xia Dynasty, ruled with virtue and wisdom. He taught people the techniques to control flood., and set up a system called Abdication. This system was to choose leaders to rule according to their abilities.

Under Yu the Great’s authority, economy and commodity increased. People practiced agriculture. They also created tools and handicrafts in various shapes, sizes, images, and colors. All tools and handicrafts were made of stone, jade, and bronze. In addition, people invented a calendar system which was used for lunar and solar movements.

After Yu the Great died, his son, Qi, was recommended to be the next ruler of the dynasty. Qi proved that he was capable of taking his father’s place. He eventually became the emperor. Under Qi’s rule, he broke the system that his father had set and established the Hereditary System. The Hereditary System was set to pass the title of the emperor to the emperor’s offspring.

Under Qi and some of his offspring’s rule, the Xia Dynasty became a peaceful and prosperous dynasty. However, some of Qi’s heirs did not care about the kingdom. Also, they killed ministers who gave them good advice. Other of Qi’s successors were tyrannical towards their people. As a result, people were outraged toward the emperors. They eventually followed a leader called Tang to overthrow Jie, the last emperor of the Xia Dynasty.

When Tang became the emperor, he established the Shang Dynasty or Yin Dynasty (1600-1046 B.C.). He also ruled the northeastern part of China. Under Tang’s rule, he ended the oppression and persecution that Jie had created. He also set a political system where kings were in charge of the economy and military. Kings were also served as a head priest.

Tang also established a religious system. He believed that the oracle bones interpreted future events. Also, Tang believed that worshipping Shang Ti, gods, and ancestors were important. According to the legend, Shang Ti was a supreme god who ruled over the universe and lesser gods.

Shang Ti was also a god who regulated human affairs. In contrast, ancestors were not gods. Tang and the people believed that their ancestors were only figures who continued to show interest in their families and descendants. However, they worshipped and sacrificed animals, slaves, and prisoners to the gods and ancestors.

The economy and arts increased dramatically during the Shang period. Farming, hunting, fishing, and animal husbandry were the main sources of the economic growth. Another source of economic growth was the production of arts. Many musical instruments were invented, such as drums and cymbals. Moreover, crafts, tools, and weapons were made of bronze in various shapes, sizes, and colors. Images of animals and writing were also engraved on potteries, vases, and other arts.

The Shang Dynasty flourished dramatically under the reign of different emperors. However, emperors often were at war with neighbors and nomadic tribes for land. They were also tyrannical towards people and ministers, which created social problems. As a result, other countries and the people rebelled against Emperor Zhou, the last emperor of the Shang Dynasty. At last, Zhou Wenwang, the chief of Zhou tribe, overthrew Emperor Zhou.

The Shang Dynasty ended in 1046 B.C., and the Zhou Dynasty (1046-221 B.C.) began. Zhou Wuwang, Zhou Wenwang’s son, established the Western Zhou Dynasty (1046-771 B.C.) after his father died. He also made Haojing, modern day county of the Shaanxi Province, its capital. From there, he and some of his successors established a stable and prosperous country. They adopted the Shang government system, meaning that the city-states ruled and controlled all the political and economic affairs.

They also adopted the Shang writing and agriculture systems. In addition, Wuwang and his successors extended the Shang religion. He established the “Mandate of Heaven,” meaning that the rulers were appointed by the heaven. Rulers also had an obligation to protect the welfare of the people. In contrast, they would lose the mandate if they became selfish and corrupt. People would then overthrow the rulers.

During the Western Zhou Dynasty, the economy quickly recovered. The production of bronze and iron wares increased commodity. Again, tools and handicrafts were made of bronze and iron in different sizes, shapes, images, and colors. Architecture and textile also continued to develop during this period.

The Zhou people were happy under Wuwang and his later successors’ rule. However, people became enraged when King Li, the eleventh emperor of the Western Zhou Dynasty, was on the throne. He lost many battles, which created turbulence. Also, he oppressed and persecuted his ministers and people. Later, the people overthrew and exiled King Li.

Emperors after emperors tried to deal with the state affairs. Some progress was made until the King Yuwang, the last emperor of the Zhou Dynasty, succeeded to the throne. Like other tyrannical emperors, he did not care about his country and people.

The concubine finally smiled when she found out the situation. Conversely, King Yuwang’s vassals were mad and decided to join his queen’s father armies. Around 771 B.C., King Yuwang queen’s father invaded the western Chou and its capital. King Yuwang was killed, but his son, Xian Jiu succeeded to the throne. He established the Eastern Zhou Dynasty (771-221 B.C.) and moved the capital to Luoyang, present day of Henan Province.

In the Spring and Autumn Period (770-746 B.C.) and the Warring States Period (475-221 B.C.) of the Eastern Zhou Dynasty, achievements were in progress. Agriculture, such as farming and fishing, continued to develop. Architectural skills were also more advanced than during the Western Zhou Dynasty. Handicrafts and tools made of iron were invented.

Above all, many major schools of thought, such as Confucianism, Taoism, Legalism, and Mohism, were established. All these schools of thought have had their own philosophy to develop a moral society. For instance, Mohism talks about universal love to create a perfect society.

Despite the achievements of the Eastern Zhou Dynasty,its power gradually declined. New traditions and systems were formed. Also, many states wanted to dominate other states. They were constantly at war among each other. Powerful states invaded less powerful states and enforced rules on them. Finally, smaller states formed alliances and agree to practice hegemony.