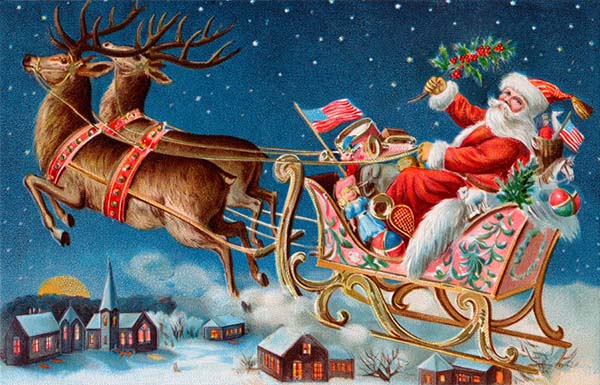 Who Santa Claus is depends on who’s asking. If it’s either of my daughters posing the question, obviously he’s that jolly fat chap in a red suit that manages to squeeze down my chimney every 25th December. (I regularly have the chimney swept during the week before Christmas.) But where does he come from? He comes from the North Pole, of course! But historically, where does he come from? Who is Santa Claus?

According to Dictionary.com, he is “a benevolent figure of legend, associated with Saint Nicholas, supposed to bring gifts to children on Christmas Eve.”

For all that, I’m no wiser than when I first asked the question.

Santa Claus as an historical figure

Santa Claus has his origins in fourth century AD Asia Minor. A certain Bishop Nicholas became renowned for his generosity in deed and in spirit, especially towards children. Many years later, he became known as Saint Nicholas, the patron saint of children.

In subsequent years, adults dressed up in bishops’ clothing, re-enacting the kindness of Bishop Nicholas. The adults went from house to house, asking if the children who lived there had been well behaved over the past year. Children commonly left their empty shoes outside overnight, in the hope that if they had been well behaved, their shoes would be filled the next morning with sweets and other small gifts.

The American version of Santa Claus derived from Dutch legend of Sinter Klaas, brought by settlers to New York in the 17th century. Legend has it that Sinter Klaas one day climbed on to the roof of a house to drop a purse of money down the chimney as a gift. The purse of money landed in a stocking which had been pegged above the fire to dry. This may be the root of the belief that Santa comes down the chimney.

It was in 1809 that the American Santa Claus is generally considered to have been the invented by Washington Irving. In his ‘History of New York’, he described the arrival of the generous, gift-giving saint on each ‘eve of St. Nicholas’.

Whereas Bishop Nicholas was always portrayed as tall and rather gaunt, Thomas Nast’s black and white illustration in1881 for Harper’s Weekly portrayed Santa Claus sitting on his sleigh, being pulled by a reindeer. He is pictured smiling, with a long, white beard, and is holding a long smoking pipe. He is wearing a furry hat, collar and belt and is laden with toys and gifts – a figure remarkably close to most modern perceptions of Santa.

The seventeenth century Puritans made strenuous efforts get rid of Father Christmas entirely; he was altogether too jolly! Oliver Cromwell’s Long Parliament even banned Christmas celebrations – and Father Christmas with them – in England from 1644 to 1660.

In the nineteenth century, Father Christmas benefited from the general Victorian revival of English traditions, including Christmas. The Ghost of Christmas Present in Charles Dickens’ 1843 novel ‘A Christmas Carol’ is based on Father Christmas

From the 1870s, Father Christmas became increasingly like the American Santa Claus, both in terms of his actions – he started giving gifts – and his appearance, with the result that two are today virtually inter-changeable.

The modern-day Santa Claus is a combination of a number of stories from a variety of countries and… the Coca Cola Company. Their 1930s advertising campaign aimed to show Coca Cola as a winter drink, not just something for the summertime. Illustrator Haddon Bloom depicted the Coca Cola Santa as warm, friendly and plump – much like Clement Clark Moore’s Santa from his 1822 poem “A Visit From St. Nicholas” (commonly known today as “The Night Before Christmas”).

Until 1964, Sundblom painted portraits of Santa for various Coca Cola campaigns. These images cemented the modern image of Santa Claus throughout the world.

The success of this campaign is evident in that most people today have more thoughts of Santa Claus and Father Christmas than they do of Jesus.

There is no doubt. Since 1955, the North American Aerospace Defense Command (NORAD) has tracked Santa Claus on his flight around the globe.

NORAD is a joint United States and Canadian organisation “charged with the missions of aerospace warning, aerospace control and maritime warning for North America…including the monitoring of man-made objects in space, and the detection, validation, and warning of attack against North America.”

You don’t seriously believe that a professional organisation such as NORAD would track Santa if he weren’t real, do you? You must be nuts!