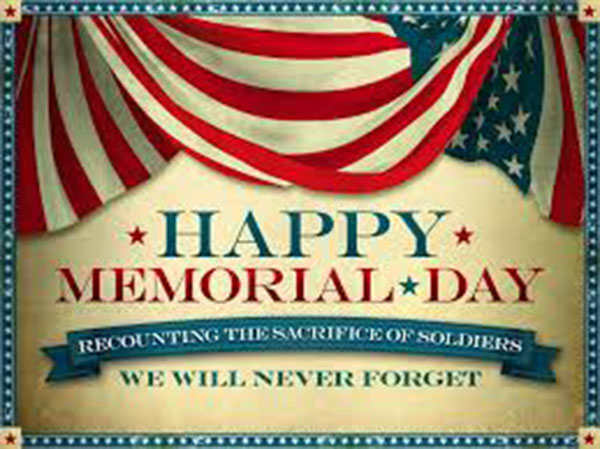 Memorial Day is about reconciliation, remembrance, and reflection. Unfortunately, though it is a national holiday, its meaning has become lost to many.

According to the US Department of Veteran’s Affairs on-line, the head of the Grand Army of the Republic (GAR) established Decoration Day (a time for the nation to decorate the graves of the war fallen with flowers and other adornments) three years after the Civil War ended, on May 5, 1868.

Thus, the first Memorial Day was born, though many still call it Decoration Day. Additionally, just across the Potomac that same year, various Washington officials gathered at Arlington National Cemetery, including General and Mrs. Ulysses S. Grant. After all the speeches were done, the officials slowly and reverently meandered through the cemetery, draping flowers on both Union and Confederate graves while reciting prayers and singing hymns.

This gathering is said by some to represent the first Memorial Day observance, and it must have been a touching scene, to be sure. But as with most things of great historical significance, claims of being first are often subject to great debate, and such is the case with the Arlington observance. Though it may have been the most famous, many springtime tributes to the Civil War’s fallen soldiers claim first Memorial Day observance rights.

For instance, in Columbus, MS a group of women visited a cemetery to decorate the graves of Confederate soldiers who had fallen in battle at Shilohon on April 25, 1866, and in Macon, MS, Richmond, VA, and Columbus, GA similar stories of observances that happened right around the same time are told with vehemence. The village of Boalsburg, PA. even boasts that it initiated the first observances a lofty two years even before the famous gathering at Arlington.

All in all, it is reported that approximately 25 towns and locations have all claimed a connection with the origin of Memorial Day, many of them in the South where most of the dead still remain. So, in 1966, Congress and President Lyndon Johnson declared Waterloo, N.Y., the “official” birthplace of Memorial Day based on a ceremonies initiated one-hundred years earlier, on May 5, 1866.

It seems Waterloo initiated the first town-wide event to honor local veterans who had fought in the Civil War. As historically recorded, the town promoted an annual day of deep reflection and remembrance, where all businesses closed, residents flew flags at half-staff, and heart-felt prayers were shared amongst all. Supporters of the Waterloo claim argue that other places may have indeed held earlier events, but they were either informal, not community-wide, or were not annually re-occurring.

And so Memorial Day finally had its birthplace, but it would not be until after World War I that the day was expanded to honor those who have died in all American wars – past, present, and future. Nevertheless, the day widely accepted and observed throughout the nation, though it was significantly later (1971) before Congress would declare it a national holiday, setting aside the last Monday in May as the holiday’s permanent dwelling place.

Interestingly, many Southern states still observe a day of their own – in addition to the national one – that honors specifically the Confederate fallen. Mississippi, for instance, celebrates its Confederate Memorial Day on the last Monday of April, and Alabama observes theirs on the fourth Monday of April.

Additionally, Georgia holds its observance on April 26, and both North and South Carolina observe their Confederate Day on May 10. Louisiana and Tennessee celebrate a Confederate Decoration Day, while Texas honors its fallen with Confederate Heroes Day on January 19. And Virginia still calls the last Monday in May Confederate Memorial Day.

The Meaning of Memorial Day: History of Honoring War Heroes

However Memorial Day is observed, perhaps General Logan – national commander of the GAR – said it best when he ordered for his posts to decorate graves in 1868: “…with the choicest flowers of springtime,” he spoke, “we should guard their graves with sacred vigilance. … let pleasant paths invite the coming and going of reverent visitors and fond mourners. .. [and] let no neglect, no ravages of time, testify to the present or to the coming generations that we have forgotten as a people the cost of a free and undivided republic.”

If these words resonate with you, it may be because the origins of special services for war dead is a venerable and long-standing practice, as the Athenian leader Pericles illustrated in his tribute to the fallen heroes of the Peloponnesian War over 24 centuries ago: “Not only are they commemorated by columns and inscriptions, but there dwells also an unwritten memorial of them, graven not on stone but in the hearts of men.”

The weight of ensuring proper consideration for the sacrifice of America ’s war heroes was no doubt a factor in December 2000 decision of the U.S. Congress to pass “The National Moment of Remembrance Act.” This legislation created the White House Commission on the National Moment of Remembrance (NMR), whose purpose is to “encourage the people of the United States to give something back to their country, which provides them so much freedom and opportunity.”

The NMR does this by encouraging all Americans to pause wherever they are at 3 p.m. local time on Memorial Day for a moment of silence to remember and honor all of those who have died in service to our nation. As founder Carmella LaSpada puts it: “It’s a way we can all help put the memorial back in Memorial Day.”