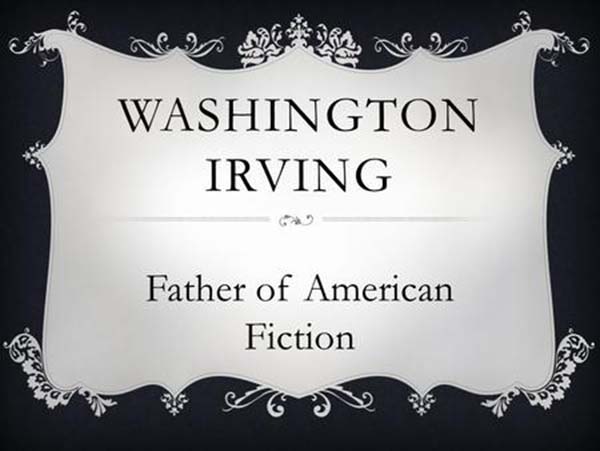 On this day in history, November 28, 1859, the famous American writer Washington Irving died of a heart attack in his bedroom at Sunnyside, his unique home known for its Dutch-style gables in Irvington, New York.

Born in New York City to Scottish-English immigrants in April 1783, with the end of the American Revolution, Irving was named for General George Washington, who met him and gave him his blessing six years later when he was president.

Irving was a sickly, spoiled but adventuresome boy, often sneaking out at night to attend the theater, which irked his pious parents, especially his father, a wealthy merchant. He soon settled down to study law and became a law clerk, though he never practiced law.

He made his literary debut in 1802 with a series of letters to the Morning Chronicle written under the pseudonym Jonathan Oldstyle, the first of many pen names. He traveled to Europe from 1804-06, visiting France, Holland, Spain, and Great Britain.

Irving created the semi-monthly Salmagundi in 1807. Writing under various pseudonyms, such as William Wizard and Launcelot Langstaff, he lampooned New York politics and culture. His reputation spread and, on November 11, 1807, he nicknamed New York City “Gotham,” an Anglo-Saxon word meaning “Goats Town.”

Irving composed his first important book, Knickerbockers History of New York, an instant critical and popular success, in 1809. “It took with the public,” he wrote, “and gave me celebrity, as an original work was something remarkable and uncommon in America.”

His satirical weaving of fact and fiction entitled A History of New-York from the Beginning of the World to the End of the Dutch Dynasty, narrated by Diedrich Knickerbocker, won him international acclaim. But this was overshadowed by the death of his fiancée, and he remained a lifelong bachelor.

Although Irving opposed the War of 1812, with the British attack on Washington, he enlisted and served on the staff of the governor of New York and commander of the New York State militia. He moved to England in 1815, and was admired for his witty literary style by Sir Walter Scott, Lord Byron, and Charles Dickens.

The Legend of Sleepy Hollow

Irvings short stories, first printed from 1819-20, were collected in The Crayon Papers and The Sketch Book of Geoffrey Crayon, Gent., used by students the world over for a century. They contain two of his most famous tales: Rip van Winkle, about a man who falls asleep for 20 years, and The Legend of Sleepy Hollow, in which schoolmaster Ichabod Crane meets the Headless Horseman.

Irving became renowned as the father of the short story. The Legend of Sleepy Hollow begins: “In the bosom of one of those spacious coves which indent the eastern shore of the Hudson, at that broad expansion of the river denominated by the ancient Dutch navigators the Tappan Zee . . .

“and where they always prudently shortened sail and implored the protection of St. Nicholas when they crossed, there lies a small market town or rural port, which by some is called Greensburgh, but which is more generally and properly known by the name of Tarry Town.

“This name was given, we are told, in former days, by the good housewives of the adjacent country, from the inveterate propensity of their husbands to linger about the village tavern on market days. Be that as it may, I do not vouch for the fact, but merely advert to it, for the sake of being precise and authentic.

“Not far from this village, perhaps about two miles, there is a little valley or rather lap of land among high hills, which is one of the quietest places in the whole world. A small brook glides through it, with just murmur enough to lull one to repose; and the occasional whistle of a quail or tapping of a woodpecker is almost the only sound that ever breaks in upon the uniform tranquility.”

Irving’s next book was Tales of a Traveller (1824). Then, he moved to Spain, where he wrote such well-researched works of historical fiction as The Life and Voyages of Christopher Columbus (1828), Chronicle of the Conquest of Granada (1829), and Tales of the Alhambra (1832).

Irving had traveled as a teenager up the Hudson River, where he often passed through the Catskill Mountains. “Of all the scenery of the Hudson,” he once wrote, “the Kaatskill Mountains had the most witching effect on my boyish imagination.”

In Tarrytown, New York, he became familiar with the adjacent area of Sleepy Hollow, with its ghost stories and quaint Dutch customs, which became the basis for his best known tales. In 1835, Irving bought a nearby “neglected cottage” for $1,800 and named it Sunnyside in 1841.

“It is a beautiful spot,” Irving wrote, “capable of being made a little paradise. My idea is to make a little nookery somewhat in the Dutch style, quaint but unpretending.” He expanded it in stages, combining his sentimental interest in the buildings he saw in Scotland and Spain with the architecture of colonial New Amsterdam.

The grounds reflect his romantic view of art, history and nature. He arranged the shrubs and trees, garden paths and water features to look natural, and planted an exotic wisteria vine, which is still growing, to surround the house, with its views of the Hudson. The nearby village changed its name to Irvington in his honor in 1854.

Irving continued to publish regularly and almost always successfully. Abbotsford and Newstead Abbey (1835) and A Tour on the Prairies (1835) were followed by Astoria: Anecdotes of an enterprise beyond the Rocky Mountains (1836), recording his impressions from his travels in North America as a guest of John Jacob Astors Northwest Fur Company.

He expressed his sympathy for Indian tribes in such stories as Traits of Indian Character and Origin of the White, the Red, and the Black Men. The Adventures of Captain Bonneville (1837) was followed by Irvings biographical books Oliver Goldsmith: A Biography (1850) and Lives of Mahomet and his Successors (1850).

His final finished work, which he had been writing for many years but usually put aside in favor of more pressing projects, was the five-volume biography of his namesake, Life of George Washington (1859).

Washington Irving, 76, was buried under a simple headstone in the Sleepy Hollow Cemetery overlooking the Old Dutch Church in Tarrytown on December 1, 1859, near where the Headless Horseman heaved his pumpkin head at a panic-stricken Ichabod Crane. Legend has it that the writer’s last words were: “Well, I must arrange my pillows for another night. When will this end?”