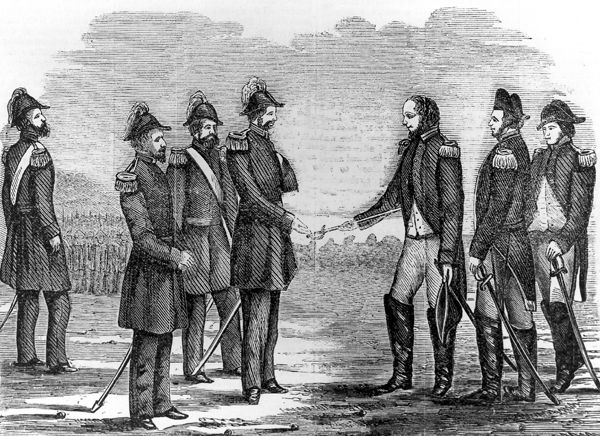 William Hull was the 59-year-old governor of the Michigan Territory. Although he was a Revolutionary War hero, Hull had suffered a stroke that rendered him a weakened man. In 1812, before America declared war against Great Britain, Hull reluctantly accepted a military commission from President Madison. He was appointed a Brigadier General and given command of the Army of the Northwest.

William Hull took command on May 25, 1812, in Dayton, Ohio and soon began moving his army north to Fort Detroit. Along the way, he laboriously cut a supply road through the wilderness from Urbana to Detroit, a distance of over 170 miles. On June 24, six days after the U.S. declared war on Great Britain, Hull was ordered to occupy Fort Detroit immediately. Unfortunately, the order did not mention that war had been declared!

When his forces reached the Maumee River late in June, General Hull hired the schooner Cuyahoga to carry their heavy equipment and entrenching tools to Detroit. Unfortunately, he mistakenly included information about his army and their strategic plans.

On July 3, the army was marching through Frenchtown (now Monroe, Michigan) on the Raisin River when Hull received a second dispatch. This message belatedly informed him that war had been declared. The dispatch was received too late to recall the Cuyahoga: the British forces from Fort Amherstburg seized the schooner and discovered Hull’s plans and details of his army.

The First Invasion of Canada

On July 9, General Hull and approximately 1,600 troops invaded Canada by crossing the Detroit River and occupying Sandwich (now Windsor, Ontario). Their advance was unopposed. At the time, the forces in the vicinity of Fort Amherstburg, twenty miles to the south, consisted of approximately 100 British regulars, 300 militia, and 150 Shawnee Indians led by Tecumseh.

The Army of the Northwest occupied Sandwich for four weeks. General Hull sent armed reconnaissance forces towards Amherstburg, and they discovered the fort was weakly defended. Despite his militia officers urging him to attack, General Hull refused to advance on the fort without orders. On July 20, 1812, William Hull issued a rousing proclamation to the local Canadian militia that further weakened the British forces by convincing many of them to abandon their military service or defect to the U.S.

Meanwhile, the American forces discovered their supply line was blocked. A small Indian force at the Raisin River stopped a detachment of militia carrying supplies north from Ohio. On August 4, General Hull sent a a force of 150 men led by Major Thomas Van Horne to break through, re-open the road, and deliver personal mail and official dispatches. This force was ambushed by Tecumseh and his men and forced to retreat in the Battle of Brownstone. A mailbag captured by the Shawnee contained letters divulging Hull’s uncertainty, his fear of Indian attack, and his soldiers’ increasing lack of confidence in him.

Even more troubling, news arrived that Fort Michilimackinac had surrendered on July 17, 1812.

On August 8, General Hull sent a force of 600 men led by Lieutenant Colonel James Miller in another attempt to re-open his supply road. This force was also ambushed, at the Battle of Maguaga, but the Americans forced the British and Shawnee to retreat. Despite the victory, General Hull ordered the troops to withdraw to Fort Detroit.

Much to the frustration of his soldiers, on August 11, a shaken General Hull ordered his forces in Sandwich to withdraw to Fort Detroit. He even suggested they should return to Ohio, but militia officers convinced him to stay in Detroit or risk losing his army to desertion. Hull’s men had lost all confidence in him. Many believed he was a coward.

Two days after Hull’s withdrawal, General Isaac Brock arrived with reinforcements and took charge of the British forces, now numbered about 1,600 regulars, militia, and Indians. He learned of the captured mailbag, the Americans’ poor morale, and Hull’s fear of Indian attack.

General Hull once again tried to open his communications and supply line by sending a force of 400 men led by Colonels Lewis Cass and Duncan McArthur. This detachment successfully reached Ohio but could not find the encampment with the supplies. These men refused to return to Fort Detroit because of their mistrust of Hull; instead, they encamped nearby in the wilderness.

In early August, an increasingly defensive Hull ordered Captain Nathan Heald to abandon Fort Dearborn in Chicago. Captain Heald obeyed the order. On August 15, 1812, during his withdrawal, Heald’s troops as well as civilian women and children were massacred. The action became known as the Fort Dearborn Massacre.

Isaac Brock and his forces crossed the Detroit River, lay siege to Fort Detroit, and began firing artillery. Taking advantage of William Hull’s fears, General Brock fooled him into thinking a large force of Indians would be attacking Fort Detroit. In his surrender demand, Brock warned Hull that he could not control the Indians once the fort fell, and there was a good possibility that they would massacre everyone in the fort.

William Hull was concerned for the safety of his son, an army captain, as well as for the women and children taking refuge in the fort. On August 16, 1812, without consulting his officers, General Hull surrendered Fort Detroit and his entire army, including the men encamped in the wilderness. The first invasion of Canada had ended catastrophically with the loss of Forts Mackinac, Detroit, and Dearborn.

General William Henry Harrison replaced General Hull and attempted to recapture Fort Detroit in January 1813. William Hull was later court-martialed for surrendering Fort Detroit, found guilty, and sentenced to be executed by firing squad. He was reprieved by President Madison due to his Revolutionary War service.